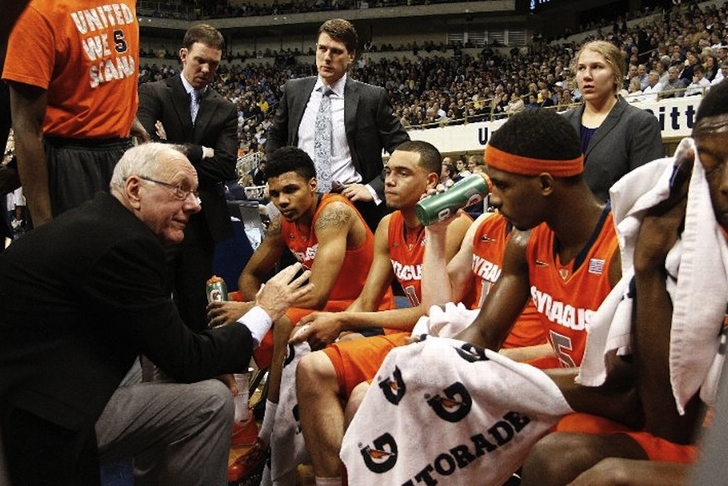 Syracuse was the hottest team in the country at the beginning of the year, starting 25-0 and grabbing the No. 1 national ranking for several weeks, but since then the Orange have lost five of their last seven and fell to a #3-seed. They'll face #14-seed Western Michigan at 2:45 p.m. on Tuesday on CBS.

It's quite simple - when Syracuse was scoring effectively, they won. Once the ran into some offensive troubles (major ones at that), they started losing.

Senior forward C.J. Fair (16.7 ppg, 6.2 rpg) was one of the best players in the country during 'Cuse's 25-game winning streak, but has been just an average player since then. Freshman point guard Tyler Ennis (12.7 ppg, 5.6 apg) has kept his steady form all season, but hasn't been able to step up and carry the offensive load when others have struggled.

They've been reliable on defense all year, but they need to get back to playing good offense to make noise in the tournament.

First Round Matchup – vs. (14) Western Michigan

Senior guard David Brown (19.4 ppg, 3.6 rpg) and center Shayne Whittington (16.3 ppg, 9.1 rpg) carry Western Michigan's team, and both can play with anyone in the country. The Broncos are a good offensive team, averaging 72.5 points a game and shoot just under 47% as a team from the field.

However, they're just an average three-point shooting team (33%), and will have to do better than that to have any success in stretching Syracuse's zone. Western Michigan is also an above-average defense team, and will provide the Orange with a difficult challenge.

That challenge will be one the 'Cuse should be able to overcome with their superior talent and coaching, but the Broncos will push Syracuse enough to make fans nervous and gear the Orange up for future rounds.

Tyler Ennis, C.J. Fair, and Trevor Cooney all recapture their January form and make Syracuse's offense viable again. They get past Western Michigan easily then comfortably defeat Ohio State or Dayton to get to the Sweet 16 before using their patented 2-3 zone to shut down Kansas and Florida to get to the Final Four. The Orange continue to roll with their re-found offense along with their defense and win the national championship.

The Orange continue to struggle offensively and Western Michigan gets hot from the field, doing enough to stretch Syracuse's zone to pull the first round upset.

Both scenarios aren't out of the question with Syracuse, who has been one of the most puzzling teams in college basketball this year.

They're still talented enough to do some damage in the tourney, but are so offensively challenged that they will likely falter against the other top teams in their region.

The good news for them is that their path to the Sweet 16 is practically paved for them as they're heavy favorites to beat Western Michigan and will likely face Ohio State in the next round, who is even more offensively challenged than the Orange, believe it or not.

I think the Buckeyes will lose to Dayton in their first round matchup, however, and the Flyers have the tools necessary to pull an upset over Syracuse in the Round of 32. But the game will be close, and the Orange are remarkably good in close games, so they'll advance to the Sweet 16.

There they'll face Kansas in all likelihood, who just has too much firepower and talent on both sides of the ball for 'Cuse.