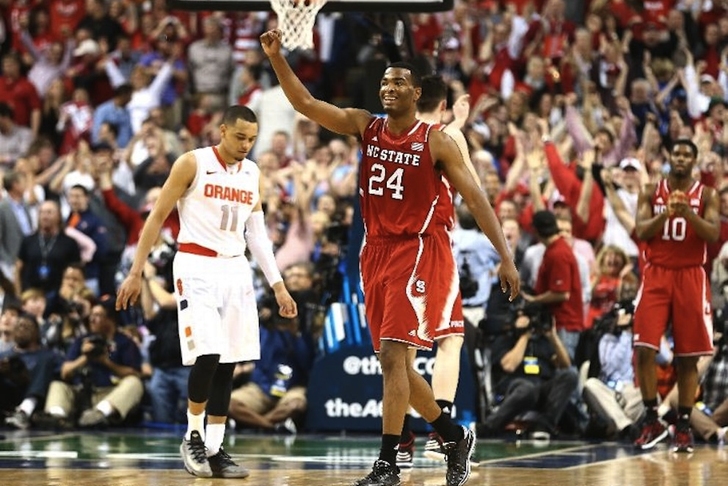 The Wolfpack barely snuck into the NCAA Tournament as they were the last team to be put in the field. They earned a berth in the 12-seed play-in game that will be held in Dayton on Tuesday night.

You can't talk NC State without talking about ACC Player of the Year T.J. Warren. He has almost singlehandedly willed this team to where they are now, but that's not to say the rest of head coach Mark Gottfried's team isn't talented.

Point guard Anthony Barber will be a stud, Desmond Lee looks like a very capable scorer when given minutes, and Lennard Freeman and Kyle Washington look like future anchors on the post.

The problem is, they're all freshman and three of the four are coming off the bench. So while NC State's future may be bright, don't give up on the present.

This might be Gottfried's best coaching job yet, taking this young and inexperienced team that was picked to finish 10th in the ACC before the season began and doing justenough to exceed expectations and make the NCAA Tournament.

The Musketeers were successful in their first season in the new Big East, going 10-8 in the very competitive conference. Sophomore guard Semaj Christon (17.1 ppg, 4.2 apg) leads this team and is one of the best kept secrets in the country and can play with anyone in the country.

Xavier is a solid offensive team that moves the ball to get good shots, averaging over 72 points per game and shooting over 47% from the floor. Their problem has been on the defensive end where they are very inconsistent.

Christon's ability to match Warren on the offensive end and Xavier's ability limit NC State's role players will be the deciding factors in who advances to face Saint Louis on Thursday.

NC State continues to ride Warren's hot streak and Turner's improved shooting touch past Xavier, and then Warren's ability to get and make shots whenever he wants carries the Pack over an offensively-challenged Saint Louis team.

However, that's the max they can hope for. Louisville would be awaiting them, assuming they take care of business against Manhattan. Their press would speed up State's young guards and cause an abundance of turnovers, which plagued Mark Gottfried's squad for much of the season.

The Pack leave their magic in Greensboro, and no one other than T.J. Warren can do anything on offense. Xavier takes advantage and wins easily in Dayton, sending State home early.

I'm going with the best case scenario with the Wolfpack. No one in the country is playing better than T.J. Warren right now, and the supporting cast around him has stepped up and filled their roles.

Tyler Lewis' re-emergence at the point has helped steady the offense, and Gottfried has developed a steady, defined bench rotation led by Barber.

Warren will likely be able to lead State past Xavier by himself, which brings up a tricky game against Saint Louis.

The Billikens are one of the nation's best on defense, but are one of those teams that really struggles to score the ball. They've also lost four of their last five games after winning 19 in a row and reaching a #10 national ranking.

Those recent problems and lack of offense make them right for the picking for an upset, and NC State's late season surge and Warren's ability make them the perfect candidate.

That upset will be nice, but they won't be able to make it two. Louisville is just too fast, too strong, and too talented for this young Wolfpack squad. With that being said, this team does have talent and will be a threat in the ACC next year, especially if Warren decides to come back for his junior season.

Not bad for a team that was supposed to finish in the bottom third of the ACC.