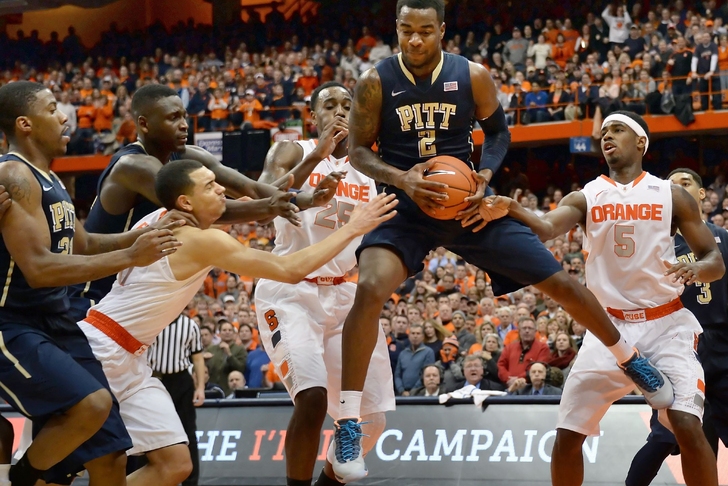 Syracuse had last week off before facing Miami on Saturday, and jumped out to a huge 26-11 lead before the Hurricanes stormed back to take a 47-46 lead with eight minutes left in the second half. The Orange ultimately regained control on their way to the victory.

While they are still undefeated, Syracuse has shown some cracks in their armor the last few games, most notably in their inability to score for stretches at a time.

They obviously have a monumental matchup with Duke that everyone has been looking forward to (College Gameday will be in the Carrier Dome for the game), but they have to be careful not to overlook Wake Forest. The Deacons are undefeated at home, and this is their chance to pick up a marquee win. The potential for a trap game is there if the Orange aren't careful.

The Panthers looked very impressive in their blowout victory over Clemson, but severely struggled on the road against Maryland, even though they came out on top.

Perhaps they were looking ahead to Monday night's matchup with Duke, where a win over the Blue Devils would resonate nationally and send a statement to the rest of the ACC that Pitt is one of the top teams.

That matchup figures to go down to the wire, but Pittsburgh has to be careful to avoid a hangover loss against the capable Cavaliers. The good news is that both games are at home, where Pitt has been dominant this season.

Virginia took care of business last week, blowing out two inferior opponents. They may not be a legitimate threat to win the ACC, but they're looking like a surefire NCAA Tournament team with the potential to make it to the second weekend.

The Cavaliers have to be careful, as teams do with every conference road game, against a Notre Dame team desperate for a win, before facing Pitt over the weekend with a chance for a statement victory to cement their place atop the ACC standings.

The Blue Devils were the most impressive team in the ACC last week, blowing out two good teams in Miami and Florida State. Unfortunately for them, they may have the toughest week of anyone in the country coming up.

Road games against Pitt and Syracuse await, with both teams looking to establish their presence in their new conference against an ACC traditional power. On top of that, both the Panthers and the Orange are big and play a physical, Big East brand of basketball, the opposite of Duke's guard-oriented, up-tempo style.

Yet Duke has been playing well of late, and these matchups will reveal if Coach K's squad belongs among the nation's elite.

Wake Forest has come on strong the last few weeks, winning three of their last four games. They took care of business last week, beating two teams that now sit at the bottom of the ACC standings.

The Deacons still have not last at home this year, and are a totally different team there then when they are on the road. Luckily, they get both games next week in Winston-Salem.

They should beat a struggling and inconsistent Georgia Tech team over the weekend, and have a chance to pull a major upset when the undefeated Orange come to town. Syracuse might be looking ahead to Duke, and a Wake Forest win could put them in the NCAA Tournament discussion.

The Seminoles are losing steam as of late, after getting blown out by Duke and Virginia and narrowly defeating a bad Notre Dame team after showing some promise earlier in the season.

FSU still has tremendous size (they're the tallest team in the ACC) and head coach Leonard Hamilton still has his team playing good defense, but they need to find a way to swing momentum before their season starts to get off track.

The opportunity is there next week, with two games against worse teams with similar struggles. However, their game against NC State is on the road, and Clemson shares the same record with the Seminoles, so the potential is there for next week to go either way.

The bottom line is that next week won't make Florida State's season, but it could sure break it.

Speaking of teams falling off the wagon...holy cow. At this point last week, Clemson was tied for second in the conference with a lone loss and a victory over Duke to hang their hat on.

Now, they've suffered two blowout losses in a row (their 19 point loss to UNC was not nearly as close as the score would indicate) and are looking like the team many thought they'd be before the season started.

Pitt really exposed the Tigers' lack of talent on the offensive end and UNC took advantage of that, keeping Clemson's curse in Chapel Hill alive (the Tar Heels have NEVER lost to Clemson at home—the Tigers are 0-57 all time in Chapel Hill).

Honestly though, the middle of the ACC is about where Clemson belongs. Head coach Brad Brownell has his team playing good defense, but they just don't have the talent to belong near the top of the ACC. Their lone game next week is against Florida State, and the loser of that matchup will likely see their season go down the drain.

The Wolfpack were left for dead last week, sitting at 1-4 in the conference and getting absolutely annihilated by Duke. But after two home matchups against teams in the bottom half of the conference, NC State is sitting right smack dab in the middle of the ACC.

Their nine point victory over Maryland can be categorized as an upset even though the Terrapins are extremely inconsistent (especially away from home), and stormed back to take an overtime victory over the Yellow Jackets.

Sophomore guard T.J. Warren still leads the ACC in scoring (22.2 ppg) as the catalyst for head coach Mark Gottfried's team, and has helped them gain momentum. They face the Seminoles on Wednesday in a game that features teams going in opposite directions and, if they can pull the upset, they will have won three games in a row before facing rival UNC—and you know how rivalry games go.

At this point next week, we could be looking at the Wolfpack as the ACC's hottest team...or they could be back in the conference's bottom third.

Maryland has lost four of their last five games after a promising 10-4 start to their season. They are falling fast in the ACC, but are one of the more puzzling cases in the conference.

They suffered an embarrassing loss to NC State, but followed that up with a valiant effort against a very good Pitt team. The Terps seem to play to the level of the opposition, no matter if that has a positive or negative effect on the team.

They have a chance to sure up those inconsistencies next week, with two very winnable games against teams that are below them in the conference standings.

Then again, if we could count on Maryland to win those games, we wouldn't be talking about their inconsistencies.

UNC got back to looking desperate last Monday in their loss to Virginia, but there's nothing like a streak as old as time to boost your ego. The Tar Heels absolutely destroyed Clemson led by a spirited effort from James Michael McAdoo (22 points, 7 rebounds), keeping the Tigers winless all time in Chapel Hill.

The game could prove to be a turning point in North Carolina's season, as they finally played with the fight and heart that they have been desperately lacking in ACC play.

With two winnable games against lesser teams next week, the Tar Heels could turn their season around and get back in the NCAA Tournament picture.

Lucky for Georgia Tech, point guard Trae Golden got hot against Boston College (24 points), because if not, this team could be looking at a four-game losing streak. Nonetheless, the effort kept the Yellow Jackets out of the ACC cellar—but they're still not going to be able to turn their season around.

They have talent gaps all over the floor and lack experience, giving this team nothing to really hang their hat on. With two games against better teams coming up, the Jackets are looking at two more losses.

That is, unless they can get hot again and pull a major upset, because things like that do happen in college basketball.

Notre Dame's free fall continues, now having lost five of six since their upset over Duke. Their offense is in fine shape, which showed in their near upset of Florida State, but their defense is still atrocious.

The good news is that both games next week are at home, and the better news is that they'll be the favorites to win one against Boston College.

The Irish's season is pretty much past gone at this point, but they're looking to gain any sort of momentum to try and to get hot in March, where anything can happen. They have four of their next five games at home, so if it is going to happen, it's got to happen now.

Miami had two shots to pull major upsets this week, and two times they fell short. The Duke game was over just minutes into the second half, but the Hurricanes held a lead over Syracuse with under eight minutes to go before faltering down the stretch.

While the 'Canes are a better team than their record indicates, they still have to prove it. Their inexperience has shown at times (they lost their top six scorers from last year's ACC Championship team), and head coach Jim Larranaga has had to totally adjust the way his team plays.

A win at Maryland is a must, but a non-conference breather against Norfolk State should help this team regain some of the confidence they lost in dropping four of their last six games.

Maybe the best news Boston College has gotten this season is that they've played one less conference game than Virginia Tech, keeping them out of the last spot in the ACC at this point.

The Eagles had semi-high expectations coming into the season, thanks to the play of Olivier Hanlan and Kyle Anderson, but they have absolutely flopped this season. Boston College relies on their three point shooting above all else, but are only shooting 34% from long range on the season, a very average number.

They've lost seven of their last eight, but their one win in that stretch came against the Hokies, who they face again on Wednesday.

The Hokies showed some fight in their home loss to Wake Forest, but got destroyed against Virginia in a game that wasn't as close as the score indicated. They've been in a free fall, losing six games in a row and eight of their last nine overall.

Their best chance for a win comes against Boston College in a matchup of two equally bad teams. I would like to try and point out some positives for the Hokies, but they just aren't talented enough to compete in the ACC.