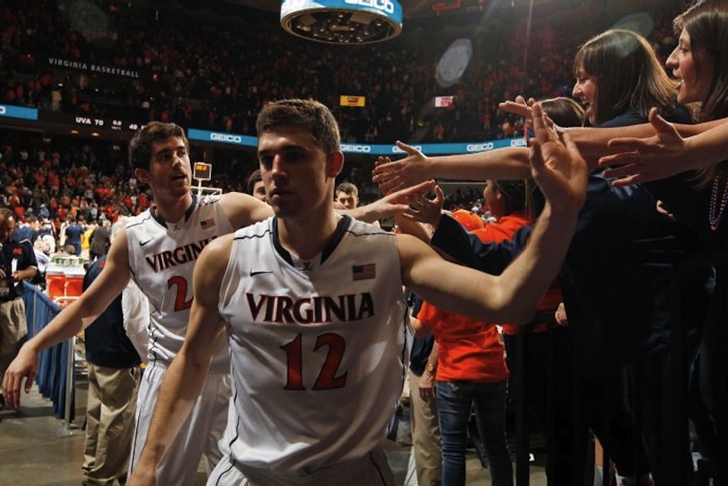 A week ago, Syracuse seemed to have the ACC regular season crown on lock.

Now, Virginia's atop the conference.

Following a week of crazy upsets (Boston College!!!) and key games deciding ACC and NCAA Tournament standing, the race for the conference championship has come down to Virginia and Syracuse.

Sure enough, they play each other this weekend, and that should decide who gets the title.

Who thought Virginia would in this position at the beginning of the year?

The Cavs have won 11 in a row and 14 of their last 15, and they've won every single one of them the same way—with excellent defense. Tony Bennett's squad ranks first in the country in points allowed per game and hasn't let an opponent hit 60 in any of their last five games.

Their home game against Syracuse Saturday should decide who wins the ACC regular season championship as long as neither one slips up.

UVA has also become a sleeper team for a deep run in the NCAA Tournament. Their defense should carry them into the second weekend, but I don't think they're explosive enough offensively to make the Final Four.

But make no mistake—this team is really, really good, and I think they'll knock off Syracuse in Charlottesville.

Syracuse had their shield of invincibility finally shattered last week when they lost to a seven-win Boston College team in what will be the upset of the year. They followed that up with a loss to Duke, and suddenly the Orange are reeling a little bit.

With two more road games coming up this week, Syracuse needs to step up their play. Maryland is looking for a win to put them back in NCAA Tournament consideration, and a win over the Orange would certainly do that, while the game against Virginia could clinch the ACC Championship for the Cavaliers.

This week will tell us a lot about Jim Boeheim's squad and whether they're legitimate national championship contenders. Those teams can rebound from a loss or two and win games like the two ahead of the Orange. If they can't, we're looking at a team slipping at the wrong time.

Duke's loss to UNC marked their first defeat in nearly three weeks, but they rebounded the best way possible by beating Syracuse. Their tough stretch of three games in five days is over, and they get a good break before facing the ACC's worst team, and then get a week off after that.

Jabari Parker has pretty much locked up the conference's Player of the Year award, but the rest of the team needs to get back to playing as efficiently as they were a week ago.

The emergence of Marshall Plumlee will help this team in March, but they need to play a lot better then they did this past week if they want to meet their expectations.

Well, UNC is officially back.

After starting the conference season off 1-4, the Tar Heels have won nine in a row and are peaking at the right time. They rebound the ball exceptionally well, play great defense, and do those things at an elite level.

The one thing that still concerns me is their lack of consistent scoring in the half-court. UNC is great in transition and has athletes at all five positions at all times, but can really struggle in a slower game.

Now, that won't really affect them until tournament time, but it's still their Achilles' heel. I think this is Roy Williams' best coaching job of his career, and wouldn't be surprised to see this team in the Sweet 16.

Remember when the Panthers were looking like they would challenge for the ACC Championship? Well, they've lost five of their last seven, starting with their loss at home to the Blue Devils. The wheels are starting to fall off on Pitt's season.

The Panthers play three of their last four opponents on the road, although the two they face this week are in the bottom third of the conference.

Pitt should make the NCAA Tournament if they avoid a bad loss for the rest of the season, but they don't have any quality wins to hang their hat on. As a result, they're starting to approach bubble territory.

Clemson got a big win over NC State early last week in a battle of NCAA bubble teams, and is still in good standing as far as the tournament is concerned.

But they are not a lock by any stretch of the imagination. As a result, they cannot afford to slip up this week. Wake is reeling and would be a terrible loss, and Maryland is another one of those teams trying to scrap and claw their way into contention.

The Tigers play great defense, but K.J. McDaniels (who's a lock for first team all-conference, by the way) is their only viable, consistent option on offense. To get into the dance, they just have to keep taking care of business and avoid the bad losses.

NC State's big loss to Clemson really put a damper on their NCAA Tournament hopes, but they can put themselves right back in the mix with a win over UNC on Wednesday. That's a tall task, especially given the way Carolina is playing right now, but it's a position the Wolfpack have put themselves in.

T.J. Warren (23.3 ppg, 7.1 rpg) is a stud and a first team all-conference player, and will play a key role in determining how Mark Gottfried's squad closes out the year.

This team is very young, but the talent is starting to come together, and might be a sleeper team to pull an upset or two in the ACC Tournament in a few weeks.

Maryland is playing a lot better since point guard Seth Allen returned from injury, but their record is keeping them out of tournament contention. However, they have golden opportunities in front of them this week.

Syracuse is struggling right now and Maryland gets them at home in the Comcast Center, which is one of the toughest places to play in the ACC. If they can pull that upset, they put themselves on the right side of the bubble.

Florida State got a much needed win Sunday night at Pittsburgh after losing six of their previous eight games, keeping their season alive.

The win over the Panthers was a step in the right direction, but the Seminoles only hope of getting into the NCAA Tournament at this point is to take care of business against both Georgia Tech and Boston College, and then to knock off Syracuse at home. Even then, they'll probably need to do some work in the ACC Tournament.

FSU has had a disappointing season with expectations of making the NCAA tourney, but has just fallen apart in the past month and a half. They have the ability to make a Cinderella run deep in the ACC tourney, which is what they're going to have to do to meet expectations.

But if we could count on them to play to their potential, they wouldn't be in this position.

Miami had a nice week last week with two victories, but they were both over teams below them in the conference standings. Up next are two road games against good teams, so the 'Canes will likely go back to losing.

However, don't be surprised to see them hang tough with Virginia. Both teams play good defense and prefer a slower paced game, which means there will be less possessions for each team. As a result, Miami will likely stay in the game longer than they should be.

They also only lost to NC State by a single point in Coral Gables, so the potential for an upset is there for in Raleigh if the Wolfpack aren't careful.

Notre Dame fell back to Earth last week after winning two in a row, but was right with Virginia until the Cavs closed the game on a 30-5 run (yes, you read that correctly).

The Irish have been playing better of late, but don't have enough weapons and aren't good enough on defense to really be a factor. They may upset someone in the ACC Tournament if they get hot from three, but that's really the only thing this squad is playing for right now.

The good news is that it's looking like they'll get star forward Jerian Grant (19 ppg, 6.2 apg) back after he only played 12 games before being declared ineligible due to an academic issue, so things are looking up for next year.

Which, quite frankly, is all Notre Dame fans have to look forward to right now.

The Deacons have lost seven games in a row after looking like a potential tournament team in January, and are really just looking for anything to stop their freefall. Their 33 point loss in the Smith Center was (hopefully) their low point of the year, as just nothing went right for them.

Wake does have their next three games at home, so they might be able to steal one of those, probably this weekend against Boston College. They are also a really young team, so there is hope for the future.

But this season is pretty much a lost cause for the Deacons.

Georgia Tech is another team that's struggling, but they really have been all season. They've lost four of their last five and play their next three games on the road, and they'll be lucky to win one of those.

The Jackets will only lose three seniors who play consistently, but those guys are three of their top five scorers.

Unless some miracle occurs, I don't think Tech will win a game for the rest of the year, and head coach Brian Gregory is probably gone after the season.

The Eagles pulled off one of the most miraculous upsets in recent college basketball history over Syracuse in the Carrier Dome, giving them a much needed highlight to an otherwise dismal season.

Unfortunately, that dismal season came back over the weekend in the form of a 27 point blowout loss to a bad Miami team.

The future does look somewhat bright for BC, who will only lose one senior in Danny Rubin, and he doesn't play consistent minutes. Olivier Hanlan (18 ppg, 3.8 rpg, 2.9 apg) is an NBA-caliber player and should be back, but the Eagles will only improve if they can get some size on their roster.

Virginia Tech's two conference wins have both come against Miami. But there are 13 other teams in the conference, and the Hokies have yet to beat any of them.

They played well in both their contests against much better competition, including a near upset of Virginia, yet still came away with two more losses.

And that next win doesn't appear to be coming anytime soon, with three of their last four games on the road and matchups against Duke and UNC this week.

The Hokies have essentially clinched last place in the ACC, which isn't something to celebrate.