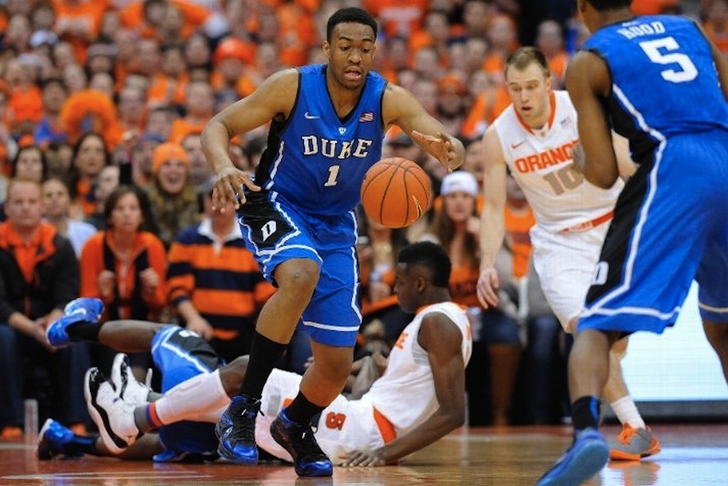 Before the season began, the ACC was being heralded as the new Big East (which was awkward considering the Big East still exists), meaning the conference was supposed to be the next great college basketball league.

Syracuse. Duke. UNC. Pitt. With teams like that, your conference had to be great.

The problem? There are 11 other teams in the conference, only one of which is looking at the postseason (Virginia).

Great conference? Eh, not so much. But the ACC does boast five teams that will make the tournament and have the potential to make deep runs in March, along with a few others that are scrapping and clawing to try and join them.

It hasn't been pretty, but Syracuse keeps finding ways to win.

Tyler Ennis' 35-foot heave at the buzzer saved the Orange from losing to Pitt, while a Rakeem Christmas steal led to a C.J. Fair layup with just over six seconds left to survive a scare from NC State.

They're still undefeated and still number one in the country, and yet Syracuse's first loss seems to be creeping closer and closer. They should easily be able to handle BC, but I think they'll lose to Duke in Cameron Indoor.

With how close their last matchup was and with the way the Orange have been playing lately, I don't think they'll be able to get it done. Then again, if the game is hanging in the balance at the end, they'll probably find some new way to pull off an improbable victory.

Virginia's winning streak has now hit nine in a row, although they struggled to get past Clemson on the road. With their next three games all coming against lowly opponents, I don't see that streak potentially ending until they host Syracuse on March 1.

The Cavaliers have stuck to their formula of stingy defense and a high rate of offensive execution. Both games were tight for the majority last week, but Tony Bennett's squad never panicked or forced the action. They stayed in their lane and kept doing what they do, trusted the game plan, and came out on top.

Their experience is really starting to show as they play these tight games, which will bode well for them in March.

Maryland gave Duke a serious scare, but a Jabari Parker dunk with a little over a minute left gave Coach K's squad the win. Basketball fans everywhere were really disappointed when Duke's game against UNC got postponed, but it made things exponentially tougher for the Devils next week.

The Georgia Tech matchup will be tricky, as the Yellow Jackets will be gunning for the upset while the Blue Devils are trying to manage minutes. Couple that with facing UNC and Syracuse in a three-day span and you have a really tough challenge ahead.

The good news is that it will be some early preparation for the NCAA Tournament, where they'll face two high-caliber teams — like UNC and Syracuse — twice in three days. But it's still going to be a really tough test for Duke this week.

UNC will also have a tough week due to the postponement, but they have an easier time than Duke. The face Florida State on Monday, giving them an extra day of rest and preparation for the Devils, then face a struggling Wake team afterwards.

Their matchup against the Seminoles will be tough as FSU desperately needs a big win against a team like Carolina, so they have to be careful not to look ahead.

The Tar Heels looked really strong against Pitt in extending their winning streak to six games, and have a clear identity as a team now. They're a great rebounding team that plays good defense, but still really struggle to score in the half-court.

They'll be able to stay with Duke, but ultimately I don't think they'll have enough to get it done in that matchup.

Pitt had two great chances to pick up a much needed signature win last week, but fell just short in both occasions. The Panthers are still 0-6 against teams currently ranked in the top 25, but have still taken care of business against everyone else.

They need to continue that trend against Florida State next weekend and avoid any bad losses if they want to ensure their berth into the NCAA Tournament. They're in right now because they have no bad losses, but not having any big wins will hurt their seeding. One big win and they're a lock, but they won't have any more opportunities to do so until the ACC Tournament.

If they win out the regular season, which they really should be able to do, the Panthers will be in, probably as a eight or nine seed. But with just one loss, they'll find themselves firmly on the bubble.

The Wolfpack are getting hot at the right time, having won six of their last eight games. However, they still sit at .500 in conference play and have yet to capture a big win to put on their NCAA Tournament resume.

That almost came against Syracuse, a win that would've essentially guaranteed them a spot in the tournament, but they choked that away. As a result, their visit to Clemson on Tuesday has become one of the biggest games on the ACC schedule.

Both teams are firmly on the bubble, and the winner has a chance to distance themselves and be on the right side of that bubble, while the loser is going to really struggle to make the big dance.

Clemson is on the other end of the spectrum, having lost three games in a row and five of their last seven. And while they are limping into this matchup with NC State, the game is at home for them, which should give them an added boost.

The Tigers were upset by Notre Dame in double overtime due to their inability to score consistently, but then came back and almost upset Virginia. K.J. McDaniels is proving to be one of the best players in the conference (he leads Clemson in scoring, rebounding, steals, and blocks), but he rarely gets any help offensively from his teammates.

They need to beat the Wolfpack on order to have any chance of keeping their tourney dreams alive, with only Pitt remaining as a possible big win to help boost their resume, which simply may not cut it.

Florida State continued their free fall last week, and their loss to a bad Miami team at home basically kicked them out of the NCAA Tournament picture. The rebound win at Wake was nice (although the Deacons might be the only team struggling more than the Seminoles right now), but they've still lost six of their past eight games.

They have the possibility to redeem themselves this week, however, with UNC and Pitt coming up on the schedule. The only way they'll get back into the bubble picture if they pull both those upsets, which isn't totally out of the question. But if they can't, they're looking at the NIT.

Maryland looked impressive this week, playing Virginia down to the wire and nearly pulling off the upset over Duke in Cameron Indoor. However, they still lost both those games and are sitting with a not-so-pretty record.

It's unfortunate that point guard Seth Allen was hurt for a good portion of the beginning of the season because the Terps are a different team with him on the floor. But they're now firmly out of the tournament picture, with only a potential home win Feb. 24 against Syracuse being their ticket into the big dance.

The Irish managed to pull the home upset over Clemson in double overtime early last week, then followed that up by holding off Boston College last night. They've now won three of their last five games, and are looking to move up in the ACC standings before conference tournament time.

They'll likely beat a struggling Miami team on Wednesday, which would give them three wins a row before they face Virginia. Notre Dame shoots it well from three at 35.4%, and if they get hot in Charlottesville they could hand the Cavaliers their second conference loss.

Even though they're getting hot, it's equally as likely the Irish find themselves 0-2 this week. If we could count on them to beat teams they're more talented then, they wouldn't be in this position in the first place.

Three weeks ago, Wake Forest was looking at an NCAA Tournament team and a sleeper in the ACC conference race. Now they've lost five in a row, and probably won't even make the NIT.

The Deacons just don't have the ability to score the ball consistently, ranking 212th in the country in points per game and 176th in field goal percentage, while only shooting 31.8% from long range.

They've lost five games by an average of over 12 points a game, signaling that they haven't even been close. With two more road games coming up this week against better teams, I think that streak slides to seven.

The Yellow Jackets have steadied themselves a bit, winning two of their last four games, and are simply looking to play spoiler for the rest of the conference season. Both Duke and Clemson come to Atlanta this week, so the potential is there for upsets in each of those contests.

Point guard Trae Golden has come on strong and is leading Tech in points (13.4) and assists (3.1) per game, while Marcus Georges-Hunt has emerged as a good second option, averaging 12.3 ppg and hit the game winner over Boston College last week.

However, while this team isn't talented enough to do well on a nightly basis in the ACC, they are on the upswing and could upset some teams along the way if they don't take Georgia Tech seriously.

Miami's win over FSU was probably the highlight of their season, but then they followed that up with an absolute dud against Virginia Tech. They've now lost three of their last four games and six of their last eight, and seem to be falling off the wagon.

Losing all the experience from last year's team really hurt the Hurricanes, but they still have better talent than what they've shown this season. However, at this point you are what you are, and Miami isn't a very good basketball team.

Having the week off obviously helped the Hokies regroup as they ended their 10-game losing streak with an upset win over Miami. They played stout defense that was helped by the Hurricanes lack of offense, but Tech will take a win however they can get it.

The victory comes one game after they lost to Pitt in double overtime, so things could be looking up for the Hokies. They have two more home games next week, and they'll be heavy underdogs in both contests.

To be blunt, Boston College is terrible.

They've lost five in a row and eight of their last nine games, and that doesn't appear to be changing anytime soon. Their two conference wins were both over Virginia Tech, who they don't play again this season.

They don't play defense, they rank 343rd out of 350 Division 1 teams in rebounding, are 226th in scoring, and don't do much on offense except shoot threes.

The Eagles probably won't win for the rest of the season.