The 7 Best Games Of The Opening Weekend In College Football 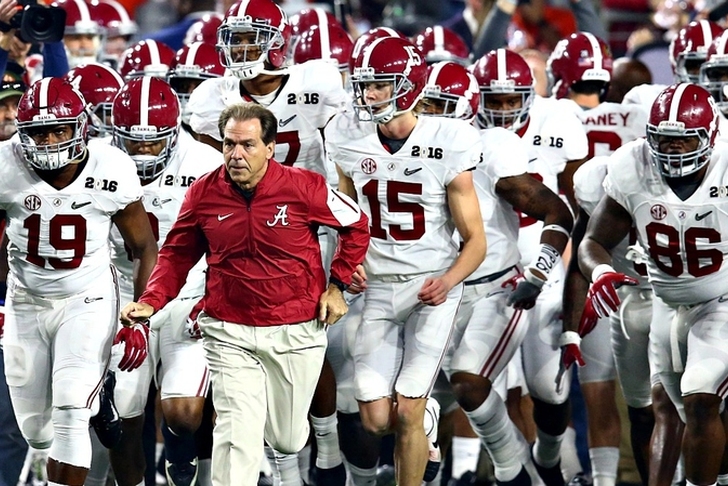 The 2016 college football season is roughly a month and a half away. The season, outside of an August 26th game between Hawaii and California in Australia, gets started the first week of September. There are games from Friday to Monday and several are must-watch matchups.

We've compiled the top games for week one of the college football season below. You won't be able to watch every snap of every game live because of overlaps in kickoff times, but the first week contains several games that will draw impressive ratings. Unless otherwise mentioned, the games are on Saturday, September 3rd. With that in mind, here are The 7 Best College Football Games Of Week 1:

7. Notre Dame Fighting Irish at Texas Longhorns - 7:30 p.m. ET, ESPN
Notre Dame blew out Texas last year, and it's unclear if this matchup will be any different. Texas has a brand new offense, and could start a true freshman QB in Shane Buechele. Playing at home should help Texas. With no NFL in this week, this game is on Sunday.

6. Clemson Tigers at Auburn Tigers - 9 p.m. ET, ESPN
This game would rank higher if the Tigers didn't struggle so badly last year. But it's still a solid ACC-SEC matchup and one that Clemson must win to help their College Football Playoff hopes.

5. LSU Tigers vs. Wisconsin Badgers - 3:30 p.m. ET, ABC
LSU's new defensive coordinator, Dave Aranda, was with the Badgers last season. This could be site of College Gameday, and it'll be fun to watch Leonard Fournette go up against the Wisconsin defense. This game is being played at Lambeau Field.

4. North Carolina Tar Heels vs. Georgia Bulldogs - 5:30 p.m. ET, ESPN
Both teams will likely be ranked when the first polls come out. UNC posted an impressive 11-3 record last year, but are without Marquise Williams, last year's QB. The Bulldogs are starting over without Mark Richt and we could get our first look at true freshman QB Jacob Eason. This game will be played at the Georgia Dome.

3. Alabama Crimson Tide vs. USC Trojans  - 8 p.m. ET, ABC
USC has struggled a bit in recent years thanks to coaching issues, but this is still a high-profile matchup. USC might be ranked in the Top 25 and Alabama should be near the top spot. Plus, there's the whole Lane Kiffin against his former team thing. This one is being held at AT&T Stadium in Dallas.

2. Oklahoma Sooners at Houston Cougars - Noon ET, ABC
Don't sleep on Houston. The Cougars beat Florida to end the season, and they're a CFP dark horse. Oklahoma is the Big 12 favorite and this could end up serving as Week 1 College Football Playoff elimination game. The Sooners are actually going to Houston for this one and it's the ideal way to start the first Saturday of college football.

1. Florida State Seminoles vs. Ole Miss Rebels - 8 p.m. ET, ESPN
Technically this on the Monday of Week 1, but we're counting it. Both Ole Miss and FSU have College Football Playoff hopes, but a loss will hurt those. This is the premier game of Week 1, and it should be a thrilling matchup between two Top 10 caliber teams.