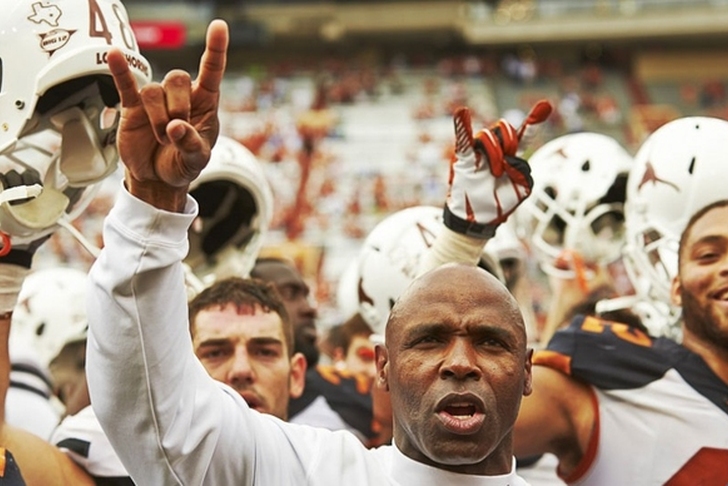 While many West Coast college students were still sleeping off their Friday nights, all of us other early birds were treated with a heaping helping of intrigue during this week's early college football games. What did we learned from the EST madness? Here's 6 things we took notice of.

Just one week after Texas suffered perhaps the most embarrassing defeat of the Charlie Strong era to TCU, the Longhorns pulled off the biggest stunner of the college football season to this point with a 24-17 victory over bitter rival, and #10 ranked, Oklahoma. The Longhorns limited one of the nation's most prolific offenses to just 278 yards. That's a more-than-impressive feat, considering this is the same Texas team that got punted 50-7 by TCU last week.

The Longhorns move to 2-4 with this win and, while all may not be right in Austin, Strong can point to this epic Red River Rivalry win as reason enough to be granted a third season with the team.

We had #3 Baylor putting 70 on Kansas today, but a 66-7 win will do just the same. The Bears amassed 644 yards of total offense against the Jayhawks, including 363 combined passing yards and five touchdowns (with no interceptions) by QBs Seth Russell and Jarrett Stidham. After OU's debacle at the Cotton Bowl, it appears it'll once again be the high-wire acts of Baylor and TCU which decide the Big 12 this year.

3. Ohio State Is In Survival Mode

Cardale Jones threw two touchdown passes, J.T. Barrett scored three times and #1 Ohio State stayed unbeaten with a 49-28 home win over Maryland. However, the score line doesn't reveal just how much OSU struggled in this one. Maryland had this game tied at 21-21 in the third quarter before the Buckeyes could shake them off to up the nation's longest winning streak to 19. This is the second straight week that a lesser opponent has tested Ohio State after Indiana put a scare in them last Saturday. However, all that really matters right now is the fact that OSU is still perfect and ups its regular-season conference winning streak to 26.

4. Iowa May Be The Class Of The Big Ten West

#22 Iowa's 29-20 win over the Indiana Hoosiers improves their overall record to 6-0 (2-0 Big Ten). With Nebraska and Wisconsin faltering, Iowa appears to be locked in a battle with Northwestern for Big Ten West supremacy. We wouldn't count out the Hawkeyes in that one, ESPECIALLY with RB Jordan Canzeri on their side. Canzeri rushed a bonkers 43 times for 256 yards and a score on Saturday. When you have a durable ground weapon like that, no game is unwinnable.

One week after being smacked in the mouth by the Florida Gators in The Swamp, QB Chad Kelly and the #14 Rebels took out their frustrations on a hapless New Mexico State team in a 52-3 home rout. Kelly threw for 384 yards and three touchdowns, erasing some of the stink left over from his night in Gainesville last week. The Rebels get one more tune-up game at Memphis next week before they get an opportunity to restate their College Football Playoff case at home against Texas A&M the week after.

6. We Shouldn't Sleep On Penn State

Plenty of folks wrote off James Franklin's boys after an embarassing opening week loss at Temple. That was a tad premature. Penn State has rolled off five straight wins since then, including Saturday's 29-7 smothering of a Hoosiers team that took Ohio State to the limit last week. The true test of PSU's resurgence comes next week, however, when they travel to Columbus to face off with the #1 Buckeyes. If they can acquit themselves well there, win or lose, PSU could be destined for a high-level bowl this winter.