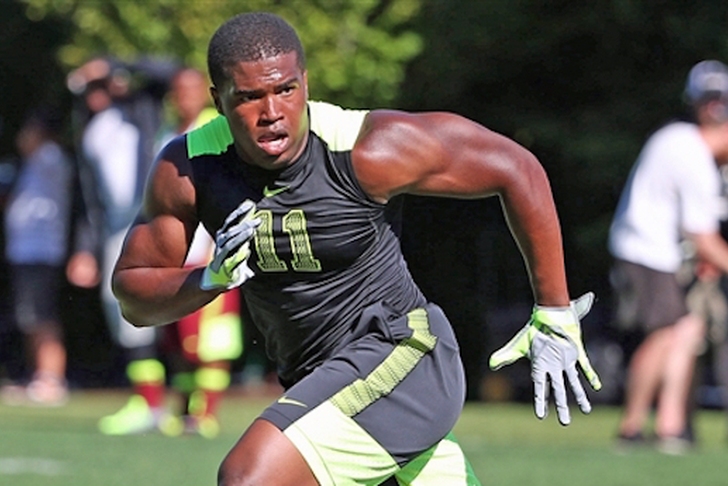 The Big Ten is on the rise with Ohio State winning the national championship and Jim Harbaugh hoping to bring Michigan back to prominence, all of which worked wonders for the perception of the conference on the recruiting trail. Here are some of those top recruits fans can expect to make an immediate impact next season:

The 6’1″, 225-pound linebacker is considered to be “ready-made” for college football, meaning he can step in and play right away. He’s versatile enough to play both inside and outside linebacker thanks to a great combination of size, speed, and athleticism.

Cole is ranked as the top athlete by 247, and brings an elite combination of size and speed at 6’2″ and 190 pounds. Michigan is already loaded at running back, so expect to see Cole get some time at wideout and kick returner.

Scott is already a true power back at 6″2, 230 pounds, which he uses to make up for his lack of speed. Look for the Spartans to use him as a short-yardage back next year since he needs time to develop his all-around game.

The Badgers quarterback situation was an absolute mess last year, and have been looking for someone who can give them some semblance of a passing attack. Wisconsin coaches think Kafentzis can do just that, and he will get a fair shot to grab the starting job from day one.

Palmer is the most important Penn State commit because of the immediate help he will provide their dreadful offensive line. Palmer also doesn’t have a redshirt available coming from the junior college ranks, but Penn State needs him to make an impact right away.

Starting quarterback Gary Nova is gone, so coach Kyle Flood will need a QB next season and for the future. Minnesota transfer Philip Nelson was supposed to step in, but he arrested and charged with two counts of felony assault, and has been kicked off the team. Dare is an in-state prospect who may be forced into action right away, and his success will make-or-break Rutgers' chances of making a fifth-straight bowl game.