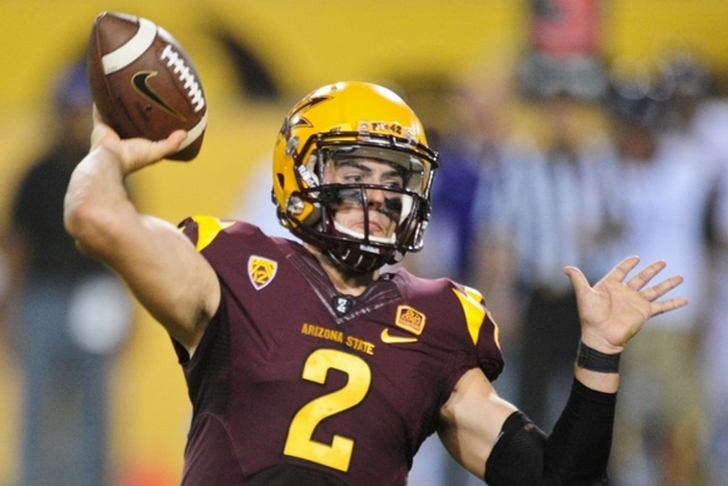 Most casual college football fans would be able to point out Ezekiel Elliott or Leonard Fournette walking down the street seeing just how much those guys (and other top CFB stars) dominate the ESPN/FOX Sports Live landscape. The five guys below are the other side of the coin -- relatively anonymous guys who made a case for national stardom with top-level performances on Saturday.

Garrett absolutely killed the Mississippi State Bulldogs on the edge on Saturday, consistently breaking through contain seemingly every play. He forced a fumble, created general havoc and vaulted into our Heisman rankings -- all in one fell swoop. If you didn't know Garrett's name before, now you do.

Northwestern may be the sneakiest of the undefeated teams left in the FCS, checking into this week's AP Poll at #13 with a 5-0 record. A large amount of the credit for the team's 27-0 home thrashing of Minnesota on Saturday goes to Thorson. The freshman sensation did a fine job as a game manager, completing just under 74 percent of his passes -- most of which were checkdowns. However, it's his two running TDs and smarts when it came to milking the clock that puts him on our list.

Heisman QB candidate Trevone Boyking threw five touchdowns in the team's 50-7 rout of Texas, four of which went to freshman WR KaVonte Turpin. While Josh Doctson gets most of the headlines (and rightfully so, as he set TCU's record for receiving touchdowns with a pair of scores), Turpin is just as integral to the team's high-wire offense.

Bercovici threw for a pair of touchdowns and ran for one more, keying the offense all night long in a protracted game of "keep-away" against a shellshocked Bruins team. ASU went into Southern California and saved their Pac-12 title hopes. Give Bercovici the game ball for leading the Sun Devils back to relevance.

Grier sparkled in the team's blowout of once-#3 Ole Miss on Saturday., missing on just five of his 29 passing attempts and throwing for four touchdowns -- all in the 1st half. UF went from nice story to legit College Football Playoff threat in one week. Grier is a huge part of that.