5 Games Which Will Decide The SEC West This Season 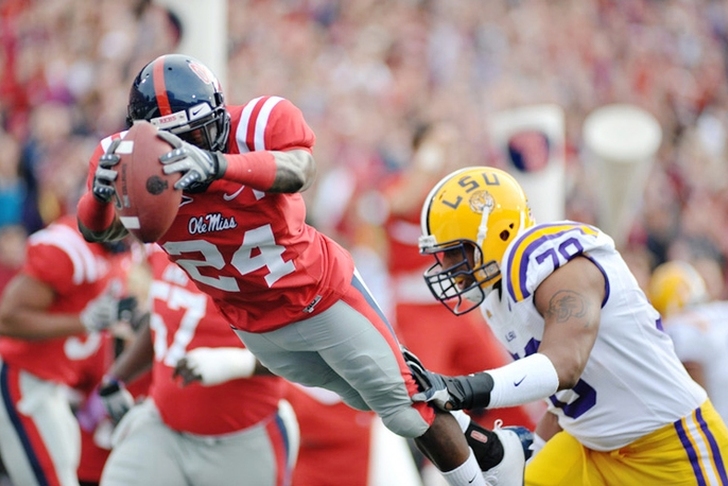 SEC football is the cream of the crop in college football, and furthermore, the SEC West is the cream of the crop when it comes to every single division in the nation right now. Every single team other than maybe Arkansas as a legitimate shot of rising to the occasion this year, making every in-division game a major one. Here's our list of the 5 Games That Will Decide The SEC West This Season.

The Iron Bowl is special for a myriad of reasons, including the simple fact that both programs and fan bases utterly DESPISE one another. White this year's incarnation may not be a de facto SEC West title game this season, it could be a critical one for either team if they catch fire after crushing losses this Saturday.

Alabama hasn't traveled to Athens since the "Blackout" game in 2008. You think the UGA fans are going to sign off on a comfortable little tea party between the hedges? Georgia has a good chance of running away with the SEC East, but this game is more about Alabama's status as an SEC West contender. They've got a cupcake in Louisiana-Monroe sandwiched between this past Saturday's 43-37 loss to Ole Miss and October 3rd's MASSIVE trip to UGA. If Alabama loses this and goes 0-2 in conference, we might have to write them off going forward.

If Texas A&M can somehow survive the #2 entrant on our list, there's a good chance this game will be for all or some of the marbles in the SEC West. The Aggies defense has been okay so far in 2015, giving up 22.3 points per contest and generally functioning in bend-not-break mode. LSU running back Leonard Fournette is adept at running through the bends in opposing defenses, so this could be a worrisome matchup for the Aggies -- especially if this game spirals into offensive fireworks mode.

Texas A&M could easily be 6-0 or 5-1 (home to Bama) at the time of this clash. That makes this a potential top-ten clash with major tiebreaker implications. The Kyle Allen vs. Chad Kelly QB matchup could be the most intriguing signal caller showdown in the SEC this year -- pitting two previously unproven commodities who may be in the running for best quarterback in the conference when all is said and done in 2015. Clear your schedule for this one.

Hands up if you pegged this game in Oxford as the bona fide SEC game of the year. We've got a sneaking suspicion that both of teams will be firmly in the College Football Playoff mix during the time of this late-season brouhaha -- making this our pick for a de facto SEC West title game (and CFP elimination game) heading into conference championship season. Leonard Fournette versus Ole Miss' "Land Shark" defense. We can't wait.