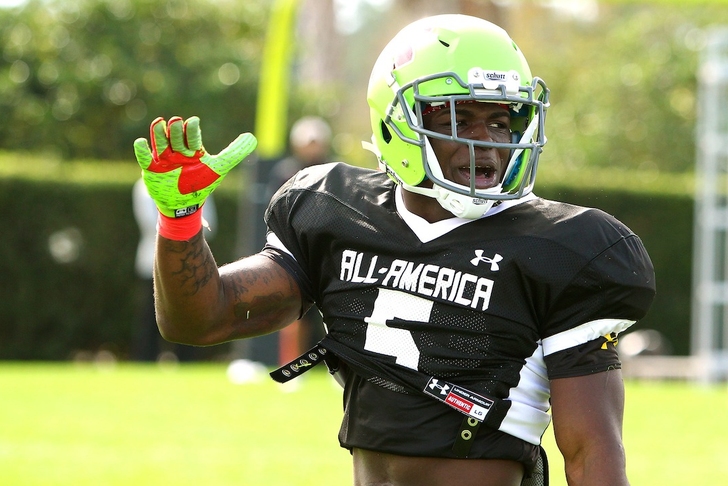 College Football season is just two months away, and the countdown has already begun in the minds of many fans.

The Big Ten should be one of the most intriguing conferences in the country this year after Michigan State ended the Buckeye's 24-game winning streak last season. New additions Maryland and Rutgers have reshaped the conference into East and West divisions (replacing the dreadfully-named Leaders and Legends divisions), creating a new exciting element to the conference.

Several teams are also celebrating some new, exciting players they managed to land on Signing Day. Which newcomers will have the biggest impact on the B1G race this fall?

Let's just go ahead and get this one out of the way.

If you're a college football fan, you know the name Jabrill Peppers - probably because your friend that's a Michigan fan is convinced he's the second coming of Charles Woodson. Those comparisons might be a little bit of a stretch at this point, but there's no doubt Peppers can play.

He has the perfect combination of size and speed (6'1", 205 lbs., 10.52 100m dash) that makes him unlike anyone else in Michigan's secondary, a unit that really struggled last season. The Wolverines must get more physical in their pass coverage and have more guys who can just make plays - Peppers fills both those needs.

The nation's No. 2 recruit is so good that head coach Brady Hoke has talked about keeping junior Blake Countess at nickelback to allow Peppers to play the traditional corner spot or moving him to safety just so he can be on the field as much as possible. Look for him to help in the return game as well.

Ohio State has their own stud defensive freshman that will see the field immediately.

The Buckeyes were weak on defense last year, finishing 7th in the conference in yards allowed per game and 11th against the pass. Add in the loss of star Ryan Shazier to the NFL, and Urban Meyer has a huge need at linebacker.

McMillan already has the size - at 249 lbs., he's bigger than all but one of OSU's 10 linebackers - to adjust to the college game and make a big impact in stopping the run.

It's still weird seeing Maryland in the B1G, isn't it?

The Terrapins may need a season or two to adjust to Big Ten football, but Damian Prince doesn't. He's massive (6'5", 295 lbs.) and quick enough to play tackle, which head coach Randy Edsall may need him to do with potential starter Moise Larose being suspended for a year.

The 5-star recruit is a great run-blocker that has the athleticism to get to the second level of a defense and be effective when he gets there, but he has to work on his pass-blocking to be as dominant has Maryland thinks he can be.

Penn State is thin at wideout due to scholarship reduction and practically no returning experience, so that gives Thompkins a great chance to earn major playing time.

He's incredibly athletic and is already the fastest guy on the team. New head coach James Franklin has said he expects Thompkins to contribute immediately on both sides of the ball (he moonlights as a cornerback as well) on top of being a good return man.

He'll also help sophomore quarterback Christian Hackenberg, who has a giant arm and should form a lethal long-ball combo with Thompkins that could wreak havoc on Big Ten defenses.

Like Penn State, Wisconsin doesn't have a lot of returning experience at the wide receiver position. The Badgers are hoping to fill those holes with five(!!) freshmen wideouts, and Sanders seems to be at the top of the group.

He is perhaps the most physical of the bunch at 6'2" and 195 lbs., and is a willing blocker down the field - crucial for a run-first team like the Badgers.

Match that with his big play ability (Sanders had a high school game where he had six catches that all went for touchdowns), and he looks like someone that will be seeing a lot of playing time in the fall.

Who else will make an impact this fall? Will any of these guys be a bust? Tweet your responses to @brauf33.