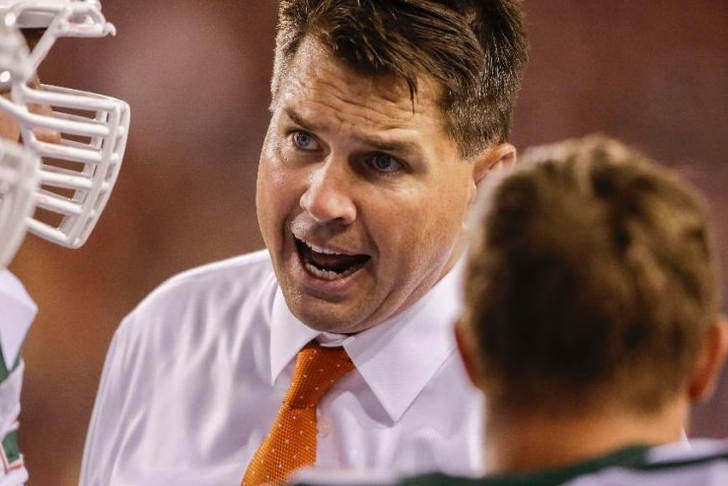 Every year, it seems like college coaches have less and less room for error - with guys like Bo Pelini getting fired with a 67-27 overall record and no seasons with fewer than nine wins...it's clear the leashes are shorter than ever.

Golden would have been on the hot seat this season, if not for the massive buyout in his contract...but that buyout number gets smaller every year, and patience in Miami is wearing thin.

The Hurricanes regressed in 2014, and even a bowl victory will leave them with two fewer wins than they had in 2013. Golden needs to start delivering the kind of results Miami fans are used to - conference titles, rivalry wins and top-tier bowl appearances - or he'll be gone.

Just two seasons ago, it seemed like Kingsbury could do no wrong - his Red Raiders went 8-5, won the Holiday Bowl in an upset, and won the hearts of America by winning a dance-off with his players.

Then, his team went went 4-8 in 2014, along with a 2-7 Big 12 record and an 0-3 record in rivalry games. The Red Raiders lost to rival TCU 82-27, and suddenly, Kingsbury wasn't the golden boy anymore - he was another coach fighting for survival in a loaded conference. Kingsbury will need to get back to his winning ways in 2015, or else he'll be taking his sunglasses & aftershave and hitting the road.

Hazell turned plenty of heads at Kent State, taking the Golden Flashes to an 8-0 MAC record and a narrow bowl loss to Arkansas before moving on up to the Big 10 to coach Purdue.

Hazell got a mulligan for his team's 1-11 record in his first year, but things were only marginally better in 2014, with Purdue improving to 3-9. Hazell's Boilermakers are now 1-15 in conference play, and he'll be under a lot of pressure in 2015 to turn that around.

Bielema was definitely on the hot seat earlier in the season, but took some of the heat off with two huge conference wins (his first in two years at Arkansas) against #20 LSU and #8 Ole Miss. As impressive as those victories were (both were shutouts, with the Ole Miss win nationally televised on CBS), Bielema has to know that in the SEC, fans (and athletic directors) have very short memories.

Arkansas will need to build on those wins next season if Bielema wants to stick around. If the Hogs struggle again - which isn't hard to imagine with five Top 25 teams in his seven-team division - the heat will turn up in a hurry.

After going 1-11 in Wilson's first year, the Hoosiers improved in two straight years...but a regression in 2014 - coupled with a 1-7 conference record - means Wilson is right back on the hot seat.

Indiana isn't paying Wilson $1.2 million a year to lose to every conference opponent except for Purdue. Somehow, this year's Hoosiers beat Mizzou on the road...but unless they can do that kind of thing more than once per year, Wilson won't be around for much longer.