5 2016 NFL Draft Prospects to Watch in the Birmingham Bowl 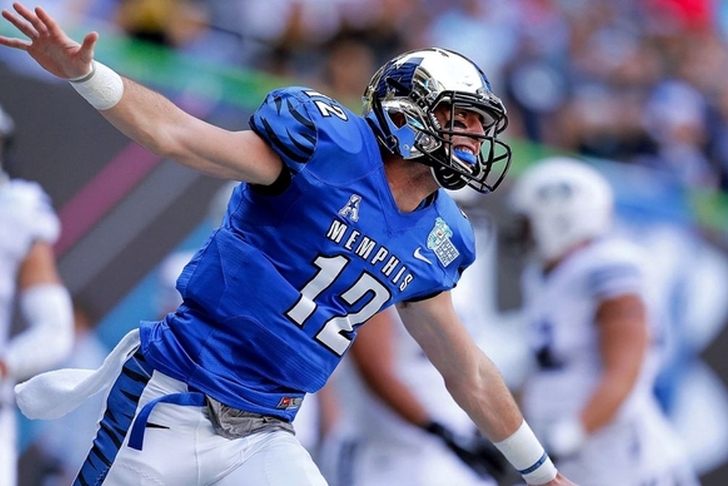 Birmingham Bowl? More like the Tiger Bowl? Am I right? I mean, am I right? Okay, sorry for that attempt to inject humor.

In all seriousness the Birmingham Bowl kicks off at Noon eastern time on December 30. The game features the vastly underperforming Auburn Tigers and the Memphis Tigers. The game has plenty to watch for and we are going to give you five more reasons to watch right here.

The 2016 NFL Draft is going to be held on April 28-30, in a location to still be determined. With every bowl season comes a plethora of NFL Draft hopefuls and this game has no shortage of that, with at least one projected first round selection.

QB #12 Paxton Lynch 6' 7", 245 lbs. (2015 Stats: 3670 YDS, 28 TD, 3 INT)
Paxton Lynch certainly has the size to be an NFL quarterback and his accuracy has only improved in his three seasons at the collegiate level. As a freshman he completed 58.2 percent of his passes, 62.7 percent as a sophomore and is completing an impressive 69 percent of his passes this season, his junior year. Lynch throws well on rollouts and ran a read-option style offense at Memphis.

Coming into the 2015 season many people had Jarred Goff of California as the top rated quarterback. There has been a shift for some as they are now ranking Lynch ahead of Goff. Obviously only time will tell who becomes the better NFL QB but for what it's worth, they are both pretty good bets.

Lawson was a Freshman All-American in 2013, before missing all of the 2014 season with an injury. 2015 was supposed to be the year he became one of the nation's top pass rushers. Unfortunately for Lawson he was injured in the second half of the Tigers opening game. The hip injury forced him to miss six games and he hasn't been statiscally overwhelming since his return. Lawson has all sorts of potential according to multiple scouts but the decision will be whether or not he will declare for the draft. That is a big if in my mind.

Draft Projection: Round 2-3 (if he declares)

Team Projection: Arizona Cardinals (rich get richer, could take a chance on him at end of round 1)

ILB #8 Cassanova McKinzy 6' 2" 253 lbs (2015 Stats: 74 TKL, 10 TFL, 5 Sacks)
Aside from having the best name on this list, McKinzy also comes in with experience as a start for three seasons in one of the better defenses in the nation. He presents a complete game and sure tackling. Drops back into coverage well and if he is able to get to the ball carrier, shows good technique in tackling.

DT #1 Montravius Adams 6' 3" 296 lbs (2015 Stats: 42 TKL, 2.5 TFL, 2 Sacks)
Adams came in as a five-star recruit when he commited to Auburn. He since has dropped ten pounds over his three years and is a bit of an athletic speciman. Has good speed for his size and is a DT who can play in the backfield more than plug the run. The downside for Adams, something that is common with DT's, is his consistency. It appears that he decides to take some plays off and doesn't give all his effort everytime.

Team Projection: Indianapolis Colts (need all the help they can get on defensive front)

LB #17 Kris Frost 6' 2" 240 lbs (2015 Stats: 90 TKL, 2 TFL, 2 INT)
Only a two-year starter, Frost had a long way to go to improve his stock this year. The good news is, he did enough to improve his stock, the question is, by how much? Having no sacks on the season hurts Frost a bit as most teams in the NFL look for pass rushing OLB. Struggles to get off blocks as well. A real project who may be asked to change positions.