4 Most Impressive Team Performances In Week 13 Of College Football 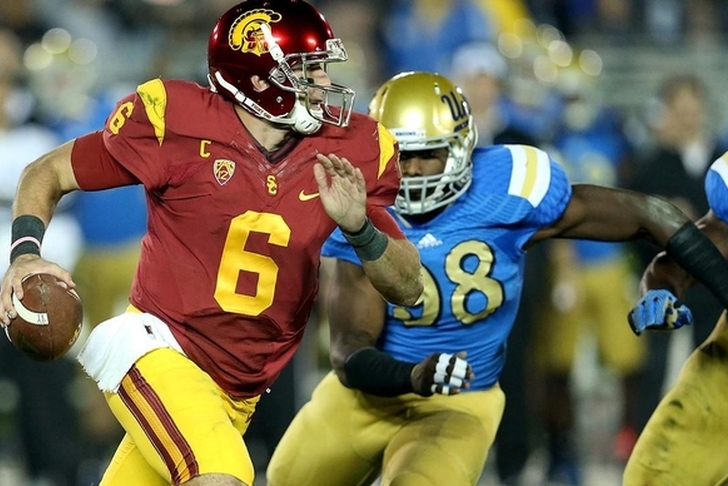 Most national sports news shows love to celebrate individual efforts when it comes to the day in college football, but we're here to focus on the TEAM. Here's the 4 Most Impressive Team Performances In Week 13 Of College Football (So Far).

If Ohio State misses out on the College Football Playoff, it won't be for a lack of trying. While Michigan State will be representing the Big Ten East in the conference title game, #8 Ohio State's emphatic 42-13 rivalry win over the #8 Michigan Wolverines makes the defending champs hard to deny as a potential #4 seed. OSU gashed a normally all-world Michigan run defense for a jaw-droppign 369 yards, with Ezekiel Elliott (214 yards, 2 rushing TD) and JT Barrett (139 yards, 3 rushing TD) accounting for 353 of that to go along with their five ground tallies.

Ohio State has made the committee's job extremely hard, but that's part of the insanity/fun of this time of year. The Auburn Tigers stuck around for the majority of the game, but #2 Alabama never seemed threatened during a 29-13 Iron Bowl win in front of a hostile Jordan-Hare crowd. Bama RB Derrick Henry is now a prohibitive Heisman favorite after breaking down the Tigers' run defense en route to 271 rushing yards and a score. On the other side of the ball, the Tide defense held Auburn's offense to just 260 total yards, boxing QB Jeremy Johnson in and holding him to under 50% passing. Bama now has a date with Florida in the SEC title game. A win there and they're virtually guaranteed of a second straight CFP berth. The #5 Michigan State Spartans may be just one Big Ten title game win away from a College Football Playoff berth after a 55-16 beatdown of Penn State on Saturday. MSU left no doubts about their worthiness as a CFP contender, following up last week's banner win over Ohio State by making PSU pay for each and every mistake they made on both sides of the ball. Making the jump from underachieving also-ran to national title threat in just two weeks, this Spartans team is peaking at the exact right time.

What a long, strange trip it's been. Just under two months ago, USC was languishing at 3-2 and staring at the unknown after head coach Steve Sarkisian was fired for his alleged behavior under the influence of alcohol while at work. However, USC has persevered in amazing fashion -- winning five of seven under interim coach Clay Helton while securing a Pac-12 title game matchup against Stanford.

Saturday's division-clinching 40-21 win over #22 UCLA is the regular-season capper on what has been an inspiring turnaround. It was a complete effort which snapped a third-game skid against the Bruins. Hats off to QB Cody Kessler and the rest of the kids who've stuck it out through some majorly thin times in 2015.