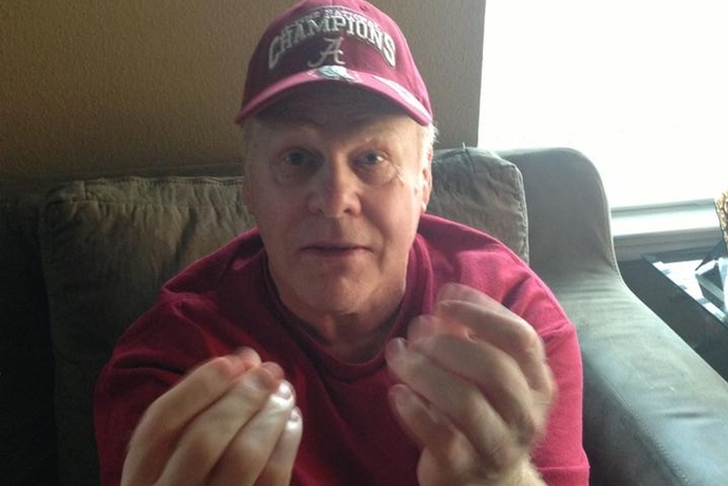 .@CollegeGameDay @AlabamaFTBL Tear it down.

Both of those tweets came after Alabama's loss to Ole Miss earlier this year, and are indicative of just how quickly a large portion of the Bama fan base will turn on its own in the aftermath of a loss. In addition, there's a litany of eyebrow-raising stories to choose from involving Tide fans over the past several years: the Harvey Updyke tree-killing incident, the fan who was convicted for "teabagging" an LSU supporter after a BCS Championship game, and the fan who was busted for drug possession and told an officer "I'm innocent, Roll Tide" are just a few.

Passion is one thing. Flip-floppy craziness is another. Roll Tide. "In 2005, Penn State students bombarded the Ohio State band with so many projectiles, including balloons filled with urine, that the band did not make the trip two years later. The night of the balloon barrage, many better-behaved Penn State fans, who confined their efforts to lending support to their team, made the OSU players swear the ground was shaking. Nothing has ever shaken, rattled and rolled like that at the Horseshoe." -- Cleveland Plain Dealer

Some people take their fandom just a little too seriously. In the case of Penn State, some fans take things WAY too seriously and WAY too far. Try perusing Penn State's internet fan boards. The depravity and unbridled hate in those forums will make you question your faith in humanity. Plus, we always are willing to dock a fan base points for blowing air horns outside of kids' hotel rooms the night before a big game. Oy.

"Other times the harassment was more severe. Matt Baker was a Tampa Bay Times beat writer whose questions to the Tallahassee Police Department helped reopen the Winston case in November 2013. “For my role in reopening a dormant investigation, Florida State fans wanted me to die of brain-eating cancer and [get] in a car crash on my way home,” he wrote in February 2015. “They told me to jump off a bridge and get hit by a truck. They suggested I get intimate with a monkey infected with AIDS.”' -- The Kernel

#FSUTwitter scares the life right out of us. In fact, we're wondering if we should even point out its worst aspects for fear of the Internet hate we're going to receive. However, there's just no excuse for taking such a blind "us against the world" stance and issuing death threats over the simple reporting of a story. We're not here to say all FSU fans live on that side of the nutso fence, but #FSUTwitter's misplaced bravado still makes us shake our heads.

If West Virginia wins a huge game, Mountaineers fans celebrate by burning couches and starting riots. If they lose? Same thing. We've also heard plenty of stories about the way opposing fans and players are treated in Morgantown. When an opposing cheerleading/dance squad decides to cancel a trip to your stadium out of concerns for their safety, you know something's off. It's a jungle out there in Morgantown.