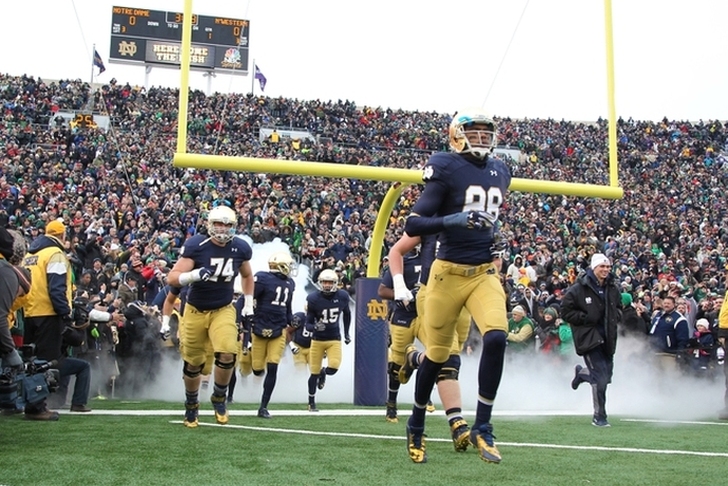 The Notre Dame Fighting Irish will play host to the Texas Longhorns in one of the most hyped and talked about games of the regular season. Both teams have aspirations of making the College Football Playoff and want to get their seasons off to a great start with a win over another traditional power. Here are 5 bold predictions for what to expect tonight:

4) Both teams will have multiple turnovers

Both Notre Dame and Texas have big question marks on the offensive side of the ball with Malik Zaire making his second career start for the Irish and Texas ranked 105th in the country in total offense last year. That will lead to multiple mistakes from each team.

3) Texas will have over 400 yards of total offense

The Irish's defense ranked 75th against the pass and 72nd against the rush last year (out of 125 teams), and they're counting on progression from the 10 returning starters to help them improve. However, they struggled defending and tackling in space last year, and with Texas' switch to a spread offense, they have a great chance to have success moving the ball against the Irish.

Tyrone Swoopes threw four interceptions in a 48-10 loss to TCU to close the regular season, along with passing for just 57 yards in a loss to Arkansas in the Texas Bowl, but still won the starting job this offseason by severely outplaying redshirt freshman Jerrod Heard. Reports indicate that Swoopes is much more comfortable in the Longhorns' new spread offense, which has made his reads easier and allows him to take more advantage of his athletic ability.

1) Texas will pull off the upset

Notre Dame will get off to a fast start playing at home, but Texas has a lot less question marks across the board. Their ability to move the ball against the Irish defense will be the key in this one, allowing them to win by a touchdown.