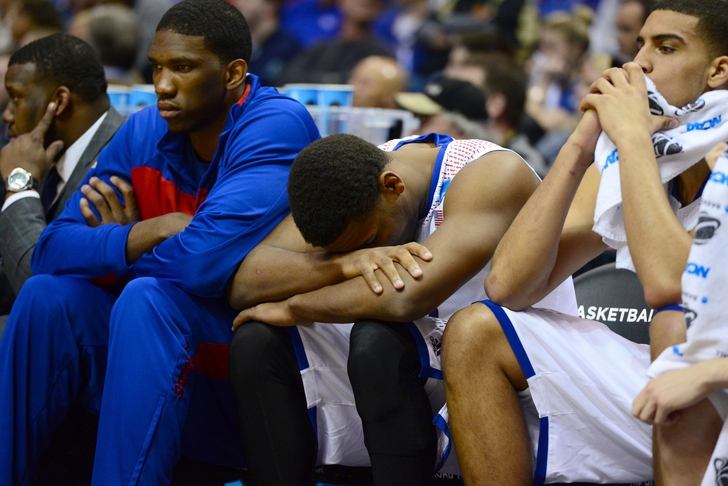 If you asked 100 basketball fans after March Madness what the best thing about the 2015 NCAA Tournament is, 97 of them will likely talk about the inevitable upsets. The other three? It's entirely possible that they will be fans of these next three teams who are still steaming from a first-round shocker.

Here's our list of the 3 Powerhouse NCAA Tourney Teams That Could Be Upset In The 1st Round.

There is a blueprint for beating this Kansas team -- hassle them with moving pieces and lockdown defense and force them to take contested jumpers and/or lose confidence from midrange. Temple did that earlier in the season in a stunning 77-52 rout, and other teams like Oklahoma St. and West Virginia followed suit. If Kansas is matched up with a low-major team that prides itself on such defense, watch out.

The former Cinderellas are now one of college basketball's elite. That's wonderful for one of the most underrated fan bases in all of NCAA hoops, but it also comes with a crazy amount of pressure that wasn't there before. Gonzaga is good enough to go to the Final Four, but they also have weakness that show up sometimes --  most notably, allowing inferior teams like USF and Pepperdine to hang around due to listless play -- that could bite them hard and early in the tourney.

Rick Pitino's Cardinals favor an up-and-down style that, when it works, produces some of the most exciting and underrated two-way basketball in the game this year. When it doesn't work (see: their late woes against North Carolina in the ACC semifinals) and they start missing shots in bunches, they're extremely beatable. We expect Louisville to at least make it to the Round of 32, but we wouldn't be surprised if they're bounced from the tourney in epic fashion.