2017 NCAA Tournament: Here Are The Only 6 Teams That Can Win The National Championship 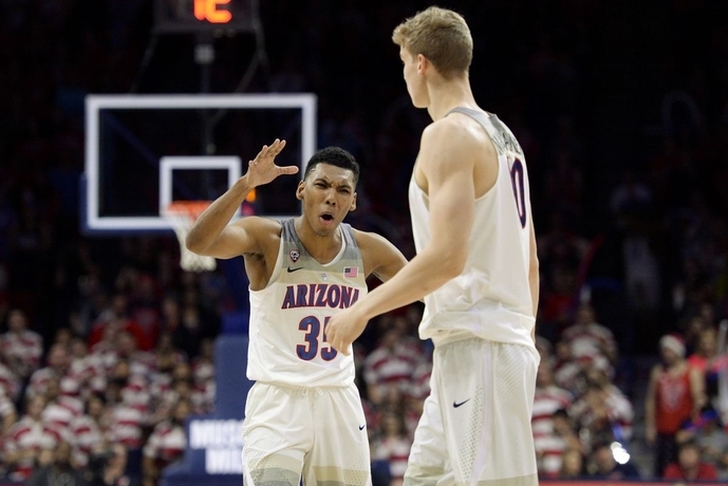 The 2017 NCAA Tournament is finally here, and just six wins (in some cases seven) over three weeks stand between the field of 68 teams and a national championship. Most of the buzz around the bracket release centers around first round upsets and potential Cinderella teams, and while that is fun and important, you can't really win your bracket pool without correctly picking the national champion. And of those 68 teams, there are only six that I think can win the national championship.

You'll notice that some teams like Duke and UCLA are not among the group, and I wrote about why those teams, along with a few others, can not win the title. Here are those six that can win, and why they can win:

Arizona is my pick to win the national championship because they are the most complete team in the country. They play the hard-nosed defense you would expect from a Sean Miller coached team, and their offense is kicking into high gear of late thanks to the return of Allonzo Trier. Trier, one of the best scorers in the entire country, was suspended for the first 19 games of the season after testing positive for a "trace amount" of a performance-enhancing drug stemming from medication he was given after being involved in a car crash during the summer.

It took the Wildcats some time to adjust to having him back on the court, but they are hitting their stride of late. That resulted in a Pac-12 Tournament title with convincing wins over UCLA and Arizona, and there's no reason to think that won't continue in the tournament.

They have three legitimate, versatile big men led by projected top 10 pick Lauri Markkanen, dynamic scorers in Trier and Kobi Simmons and two of the country's best defenders in Kadeem Allen and Parker Jackson-Cartwright. The Wildcats are for real.

I don't need to go too in-depth about why Villanova can win the national championship because they did it last year. Josh Hart is one of the best players in the country (and might be the most complete player), Kris Jenkins is a matchup nightmare as a stretch four and Jalen Brunson is capable of taking over a game himself from the point guard position.

The one weakness that could come back to bite them is their lack of size, but 6-foot-9 Darryl Reynolds (their only real big man) has held his own all year. Villanova has learned how to play - and win - despite that handicap, which is why they have the No. 1 overall seed.

The top seed in the West region, many people still have questions about just how good Gonzaga really is because of the conference they play in. In reality, that may be what keeps them from making their first ever Final Four and winning the national championship because it has been a while since they have been tested in a close game.

On the court, however, this team doesn't have many holes. They beat Arizona in their first matchup earlier in the season (though Arizona didn't have Trier), and also have wins over Florida and Iowa State. Nigel Williams-Goss is a National Player of the Year candidate, Przemek Karnowski is as big and as skilled as any any big man in the country and they are comfortable going eight deep. They also shoot nearly 52 percent from the floor and give up just 61.2 points per game (eighth in the country). Don't be fooled - the Zags are legit.

Another one seed, Kansas may not win the tournament because of their lack of size (senior Landen Lucas is really their only post threat), but there are plenty of other reasons why they could be cutting down the nets in April. The first of which is National Player of the Year favorite Frank Mason III (20.8 ppg, 5.1 apg) who is as good of a player on both ends of the floor as anyone in the country. He also might just be the nation's best closer, so if the game is tight late, Kansas is going to win. In fact, they're 8-3 this year in games decided by five points or less.

Of course, the Jayhawks also have Josh Jackson, a versatile wing who is a projected top five pick. He is an excellent passer and slasher, making him a matchup nightmare at the four position. KU also has two reliable shooters in Svi Mykhailiuk and Devonte' Graham, giving the Jayhawks a starting lineup that can compete with anyone.

More NCAA Tournament Coverage: 4 Contenders That Can NOT Win The National Championship

Sticking with the one seeds, North Carolina was the favorite to be the No. 1 overall seed in the tournament before losing to Duke in the ACC Tournament. They're the best rebounding team in the country, particularly on the offensive end, and have more talented big men (Kennedy Meeks, Isaiah Hicks, Tony Bradley) than anyone else. Of course, they also have the ACC Player of the Year in Justin Jackson (18.1 ppg) and one of the nation's best point guards in Joel Berry II.

The Heels can go 10 or 11 deep at any given time, so you don't have to worry about them getting tired or wearing down throughout the tournament. However, as we saw in that loss to Duke, UNC's offense gets off track if Berry has to leave the court for an extended period of time. If Berry gets into foul trouble or hurt, the Heels could stumble.

Kentucky can win the national championship because of two players - De'Aaron Fox and Malik Monk. Both freshmen will be top 10 picks in the upcoming draft, and both are capable of taking over a game at any given time. Look no further than Monk's 47-point performance in a win over UNC, or Fox's 28-point outburst against Alabama in the SEC Tournament. Both also consistently step up down the stretch of close games.

Bam Adebayo gives Kentucky a big presence on the inside, but outside of those three players, the Wildcats are a team full of role players. They will need both Fox and Monk to play well to beat the teams they will face later in the tournament, and while those two are talented enough to carry this team, one bad game from one of them could end UK's season.