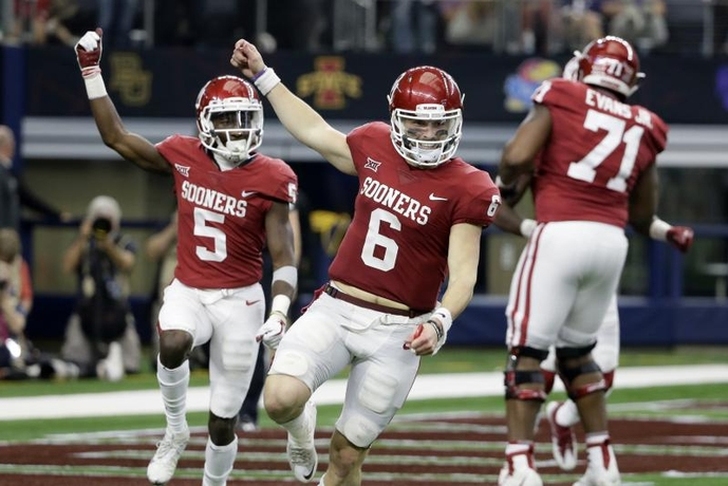 The 2017 Heisman Trophy Finalists have been announced and there's one surprise. While Oklahoma QB Baker Mayfield is the likely winner, the other invitees were unclear. Mayfield, Louisville QB Lamar Jackson and Stanford RB Bryce Love were the only three finalists this year.

Jackson is the surprise, as the Cardinals struggled this year. Still, he gets to return to New York as the defending champion. Among the more notable snubs is Penn State RB Saquon Barkley, the early season front-runner.

Louisville didn't have the same level of success this year, but Jackson again put up video game numbers. He upped his completion percentage to 60.4 percent, while throwing for 3,489 yards, 25 TDs and 6 INTs. He was again dynamic on the ground, with 1,443 yards and 17 TDs.

Mayfied is the presumptive winner, after guiding OU to a CFP berth. He completed 71 percent of his passes for 4,430 yards, 41 TDs and 5 INTs this year. He also chipped in 310 rushing yards and 5 TDs in a year in which OU lost their three best offensive weapons to the NFL.

Love didn't miss a beat in replacing Christian McCaffrey. He averaged 8.3 yards per carry, en route to 1,973 yards and 17 TDs. He is Stanford's sixth Heisman finalist, and will likely become the sixth to not win.

Check out our NCAA page for all the latest College Football Rumors or download the Chat Sports App!