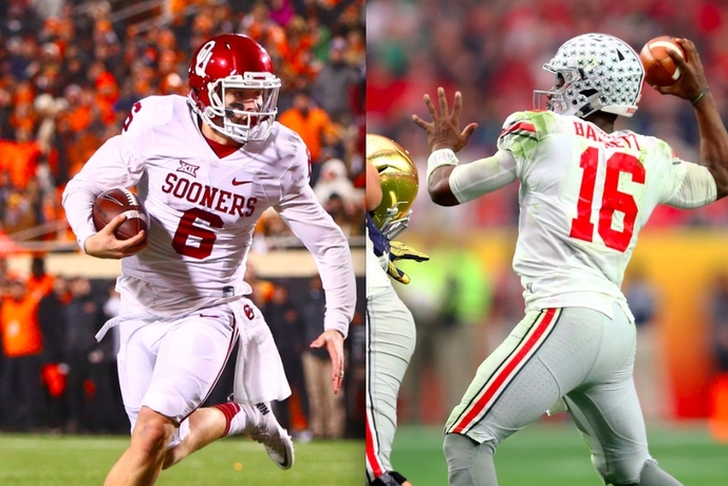 The 2016 college football season is less than a month away, and outside of an August 26th game between Hawaii and California in Australia, the season gets started the first week of September. The following month will bring us several high-quality non-conference battles between the country's top teams before they get into conference play. Here are the top 10 non-conference games we get to enjoy in September:

10) Washington State Cougars vs. Boise State Broncos - Sept. 3
Washington State is coming off a surprisingly good nine-win year, and this is Boise State's biggest game of the season. If Boise wants to make a New Year's Six bowl, this is a game they have to win. On the flip side, the Cougars can prove their legit again with a win.

9) Notre Dame Fighting Irish at Texas Longhorns - Sept. 4
Notre Dame blew out Texas last year, and it's unclear if this matchup will be any different. Texas has a brand new offense, and could start a true freshman QB in Shane Buechele. Playing at home should help Texas. With no NFL in this week, this game is on Sunday.

8) Clemson Tigers at Auburn Tigers - Sept. 3
This game would rank higher if Auburn didn't struggle so badly last year. Still, it's still a solid ACC-SEC matchup and one that Clemson must win to help their College Football Playoff hopes.

7) Virginia Tech Hokies vs. Tennessee Volunteers - Sept. 10
This game is being held at Bristol Motor Speedway in Tennessee, the first college football game to be held at a NASCAR track. Virginia Tech is breaking in a new head coach for the first time in forever in Justin Fuente, and Tennessee enters the season ranked No. 10 with sky-high expectations.

6) LSU Tigers vs. Wisconsin Badgers - Sept. 3
LSU's new defensive coordinator, Dave Aranda, was with the Badgers last season. This could be site of College Gameday, and it'll be fun to watch Leonard Fournette go up against the Wisconsin defense. This game is being played at Lambeau Field.

5) UCLA Bruins vs. Texas A&M Aggies - Sept. 3
This is a very underrated Week 1 matchup. Texas A&M is looking to return to national prominence, while UCLA is expected to compete for a playoff berth with star sophomore quarterback Josh Rosen. This game will be very telling as to where both teams stand in the national pecking order.

4) Alabama Crimson Tide vs. USC Trojans  - Sept. 3
USC has struggled a bit in recent years thanks to coaching issues, but this is still a high-profile matchup. USC is ranked 17th, and Alabama sits in  the top spot. Plus, there's the whole Lane Kiffin against his former team thing. This one is being held at AT&T Stadium in Dallas.

3) Oklahoma Sooners at Houston Cougars - Sept. 3
Don't sleep on Houston. The Cougars beat Florida to end the season, and they're a CFP dark horse. Oklahoma is the Big 12 favorite and this could end up serving as Week 1 College Football Playoff elimination game. The Sooners are actually going to Houston for this one and it's the ideal way to start the first Saturday of college football.

2) Florida State Seminoles vs. Ole Miss Rebels - Sept. 5
Both Ole Miss and FSU have College Football Playoff hopes, but a loss will hurt those. This is the premier game of Week 1, and it should be a thrilling matchup between two Top 10 caliber teams.

The winner of this game will probably end up in the top two or three of the rankings and put themselves in prime position for the playoff, while the loser will have to go undefeated in conference play to ensure a spot in the playoff. Stakes this high should make for a great game.