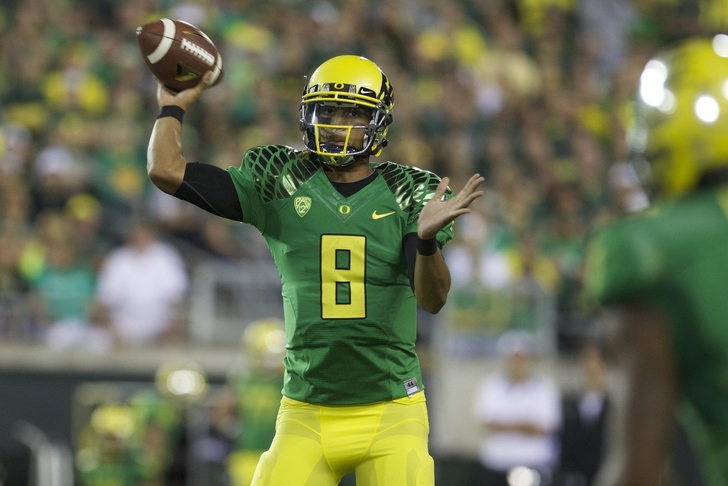 We had our first big matchup of the year when Oregon hosted Michigan State, and the Ducks - led by quarterback Marcus Mariota - capitalized on the national spotlight to the tune of a 46-27 win.

Mariota posted 318 yards passing and three touchdowns with no interceptions, and his strong play in such a big game has him taking over the top spot in our Heisman Power Rankings. Who are his biggest contenders?

Yeldon didn't play much on Saturday, taking seven carries for 43 yards in the Tide's 41-0 win over Florida Atlantic. That performance was to be expected as Alabama was trying to figure out their quarterback competition against a lesser opponent, but it didn't help his Heisman campaign.

On the other hand, Cooper has benefitted greatly from 'Bama's QB competition. He caught 13 passes for 189 yards and a score against FAU, giving him 25 receptions and 319 yards along with that TD on the season. Wide receivers rarely compete for the Heisman, but it's clear Cooper is one of, if not the best, in the country, and he is going to get plenty of opportunities as Alabama's security blanket.

Kelly accompanied a 196-yard, 2 TD passing performance with 84 yards and a touchdown on the ground in Arizona State's 58-23 win over New Mexico. The numbers on Kelly aren't great, but he's leading an offense that's put up over 52 points per game on average. He'll have a chance to bolster his Heisman hopes Saturday at Colorado before facing UCLA in Tempe on September 25.

Hundley had a good game passing against Memphis, throwing for 396 yards and three touchdowns, but the Bruins only managed to win by seven. UCLA was the darling sleeper of the offseason to make the College Football Playoff, but they've really struggled in their two wins over Virginia and Memphis by a combined 15 points. Hundley has played decent, but him and the team need to play better if he's going to put himself back in the Heisman mix.

Petty sat out of Baylor's game against Northwestern State resting his hurt back, although it was clear the Bears didn't need him as they won 70-6. Missing games will inevitably drop you down the Heisman rankings, but with how poorly everyone else played, he didn't fall that far. Petty will be back in action this week.

Golson benefitted greatly from so few players putting up great performances early in the season. He had 226 yards passing and three touchdowns in Notre Dame's 31-0 blowout victory over Michigan, and that came on the heels of a 336 total yard, five total TD performance against Rice. Golson has still yet to lose a regular season game for the Irish, and if he keeps playing well, that streak should continue for a while.

The man known as Kenny Trill followed up his 511-yard, 3-TD performance against South Carolina with a 283-yard, 4-TD game against Lamar, even though he played less than three quarters in the 73-3 blowout victory. The numbers are there for Hill, he just needs to prove himself against some more good teams before he's thrown into the Gurley-Winston-Mariota tier of contenders.

The Bulldogs were off this past weekend, so Gurley is still sitting on his monster performance against Clemson. He has a chance to catapult himself into the top spot this week when Georgia hits the road to face South Carolina, as another great game would instantly make him the Heisman favorite.

Winston's in a tough spot here considering how soft Florida State's schedule is. There's nothing he can do about it, but there's no big game he can win to make himself stand out - he's just going to have to play lights out every night. Winston did that on Saturday, throwing for 256 yards and two touchdowns while sitting for most of the game, but there was nothing special about it. He's going to have to recapture that something special he had from a year ago to really push for another Heisman.

As mentioned at the top, Mariota lit up one of the best defenses in the nation and threw himself into the Heisman limelight. He's only played three halves of football so far this year, and he's racked up 585 yards, six touchdowns, and hasn't thrown an interception while rushing for 85 yards and another score.

Who's your pick to win the Heisman? Did we miss someone? Leave a response in the comments!