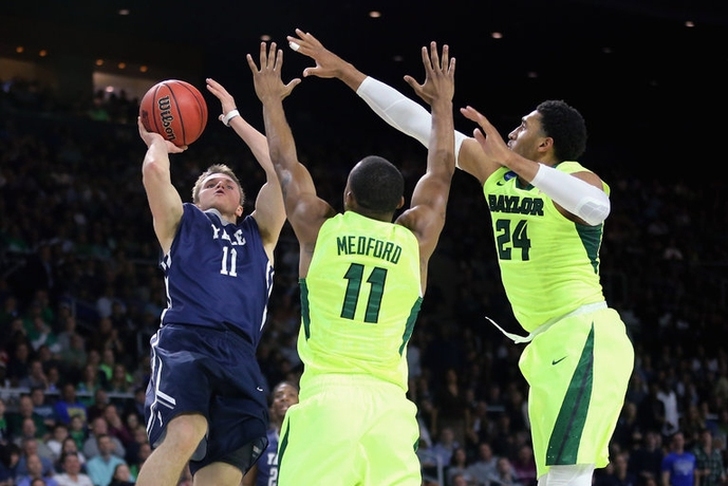 The Yale Bulldogs hadn't been in the NCAA Tournament since 1962 - now, they have their first tournament win in school history.

Yale pulled off the first major upset of the tournament on Thursday afternoon, knocking off fifth-seeded Baylor 79-75, who was upset by Georgia State in the first round of last year's tournament as well.

The Bears got off to a fast start and held the lead for the first 12 minutes of the game, but Yale closed the half on a 28-17 run to take a 39-34 lead into halftime.

Baylor fought back at the start of the second half and took a 40-39 lead, yet Yale responded almost immediately with a 10-1 run to regain control of the game. The Bears were able to cut the lead to one with less than 20 seconds to play when Taurean Smith drained a three-pointer to keep their hopes of a comeback alive, but Yale hit two more free throws to secure the win.

Yale was able to win this game because of the way they dominanted the glass. Rebounding is easily Baylor's biggest strength as they ranked among the best in the country - yet the much smaller Bulldogs outrebounded them 36-32.

Point guard Makai Mason had a career game to lead Yale in this one, scoring a school-tournament-record 31 points to go along with six rebounds and four assists. Justin Sears added another 18 points.

Yale advances to play (4) Duke in the second round on Saturday afternoon. The two sides played in Cameron Indoor Stadium in November, with Duke winning 80-61.