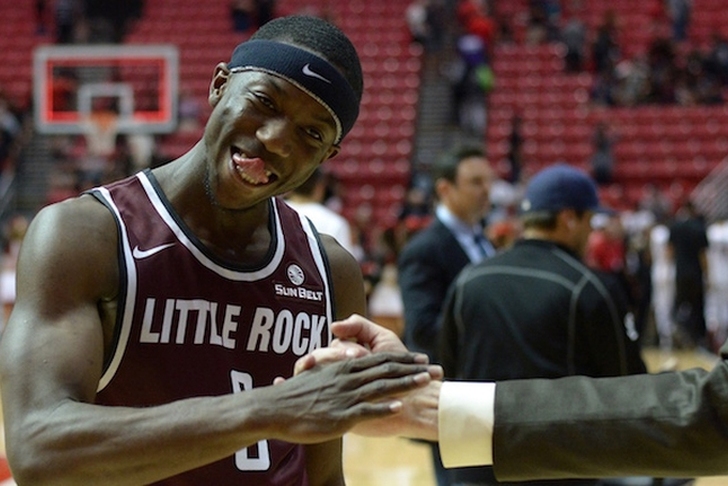 Arkansas-Little Rock became the second 12-seed to upset a 5-seed on Thursday afternoon, pulling off a miraculous 14-point second half comeback to give themselves the 85-83 win over Purdue. The Boilermakers led 63-49 with five minutes to play, but the Trojans ramped up the defensive pressure, forced several turnovers, and got themselves back into the game.

Little Rock was able to cut the led to one with less than a minute left thanks to a 12-0 run, but a three-pointer from Dakota Mathias seemed to give Purdue control again - until Lis Shoshi responed with a three of his own.

Edwards then gave Purdue a three-point advantage with 20 seconds to play after two free throws, but Josh Hagins would not let UALR go quietly into the night:

THIS IS MARCH! #MARCHMADNESS https://t.co/0P2NOYpVj6

Arkansas-Little Rock held a one-point lead for most of the extra session, but a Vince Edwards layup with less than a minute left gave Purdue the lead back. Freshman Ryan Cline hit just one of two free throws on Purdue's ensuing possession, which kept the door open for the Trojans. Hagins took advantage, making a driving layup to tie the game with 18 seconds remaining, forcing a second overtime with the score 75-75.

UALR opened the second overtime on a 5-0 run, but after some missed free throws on both sides, Purdue was able to cut the deficit to one with 11 seconds remaining on a floater from Edwards. However, Hagins hit a free throw to seal the victory.

The Boilermakers cost themselves in the game because of their inability to take of the ball, turning it over 18 times. Edwards led Purdue offensive with 24 points, and center A.J. Hammons also played big with 13 points, 14 rebounds, and six blocks.

Shoshi (14 points, nine rebounds) and Hagins (career-high 31 points, six rebounds, six assists, five steals) led the way offensively for the Trojans. It was the eighth time this season won a game where they trailed by 10 points or more.