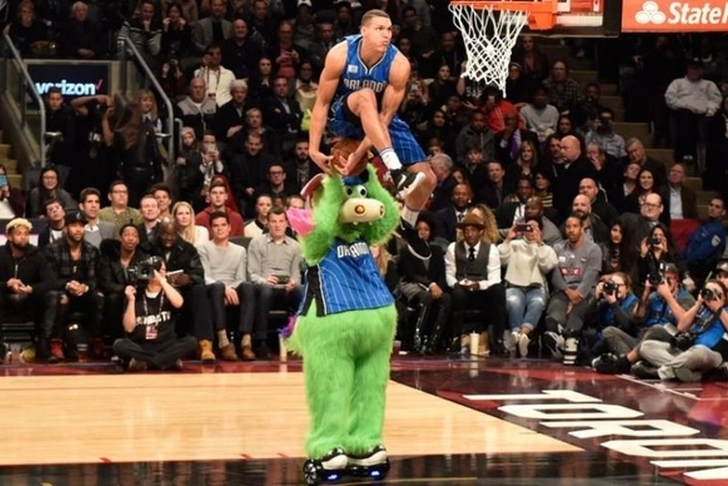 The 2016 NBA All-Star Saturday Night in Toronto wasn't just an unquestionable success. It was an absolute showcase of the best the league has to offer, mixing hilarious moments, heart-stopping showdowns and the kind of highlight-reel moments which break Twitter and turn social media into a pool of ooooooo's and ahhhhhhh's.

Looking back on the festivities, we're sure about one thing -- this was the best All-Star Saturday Night in league history. Here's why.

Want a clear picture of how the league has changed over the past few years? Everything you need to know can be summed up by Minnesota Timberwolves big man Karl Anthony-Towns' win in Saturday's Skills Challenge.

Towns took down speedy Boston Celtics guard Isaiah Thomas in a neck-and-neck race in the Finals, nailing a dagger three-pointer to outlast Thomas and bring home the first Skills Challenge win for a traditional big in contest history.

“The bigs were amazing today, and we were able to just come out with a W, and I'm glad I was able to help the bigs come out with this trophy,” Towns said, via NBA.com. “This is bigger than me. This is for all the bigs out there, with the game changing the way it is, to show that bigs can stand up with guards and skillwise.”

Guards still get the bulk of the credit when it comes to athleticism, but the new breed of big men put on a show Saturday night -- including the Golden State Warriors' Draymond Green and the Sacramento Kings' DeMarcus Cousins.

If we're going to get this kind of big vs. small fun every Skills Challenge, the contest will be a must-watch from here on out.

Before we go any further here, we have to acknowledge Phoenix's Devin Booker.

The youngest player in the league dazzled en route to the 3-Point Contest Finals, dropping 12 points in 30 seconds in a tiebreaker win to beat James Harden and J.J. Redick and make it to the Finals.

However, it was Golden State Warriors teammates and Splash Brothers brethren Steph Curry and Klay Thompson who stole the show.

Curry dropped 21 in the first round, calmly swishing his last two shots to advance to the final. It appeared the 2015 3-Point Contest winner had put together a repeat-worthy performance in the Finals, besting his first-round score with an electric 23-point barrage:

However, Klay happened. After leading all shooters with 22 in the first round, Klay Thompson went on a bananas heat check to take down Curry for the title -- hitting all five of his shots on the final moneyball rack (10 points) to end the proceedings with 26. He even threw in a little good-natured showboating before he closed things out:

Curry lost out on being the first repeat winner since Jason Kapono (2007, 08), but it didn't seem to bother him in the least after Klay became the first champ to follow a teammate's win the year prior.

In all honesty, we all won watching last night's triple barrage. The Splash Brothers have taken over the NBA's spotlight, and this was a perfect distillation of that and an uncut helping of pure entertainment.

Everybody dumped on this year's Dunk Contest field for lacking star power, with the consensus being that Minnesota's Zach LaVine would run away with the contest while fans around the world yawned along.

So much for predictions.

LaVine and Orlando's Aaron Gordon turned social media into their own personal endorsement portfolios, dueling in a game of oneupsmanship that left us dizzy by the time LaVine "won."

Sincerely, both guys should have shared the trophy. Perfect score after perfect score brought the fans in Toronto to the point of delirium, including Gordon SITTING ON A RECLINER IN MID-AIR while jumping over a mascot for a rim rocker.

Watch the video above. Watch it again. Bookmark this and come back. Vince Carter's 2000 performance was fantastic. The Jordan/Wilkins battles of the 80s were legendary. However, Saturday night tops all of those based on electricity, variety and absolutely bonkers dunks.

It was the perfect ending to a fantastic night that'll stick with us long after All-Star Weekend is in the books.