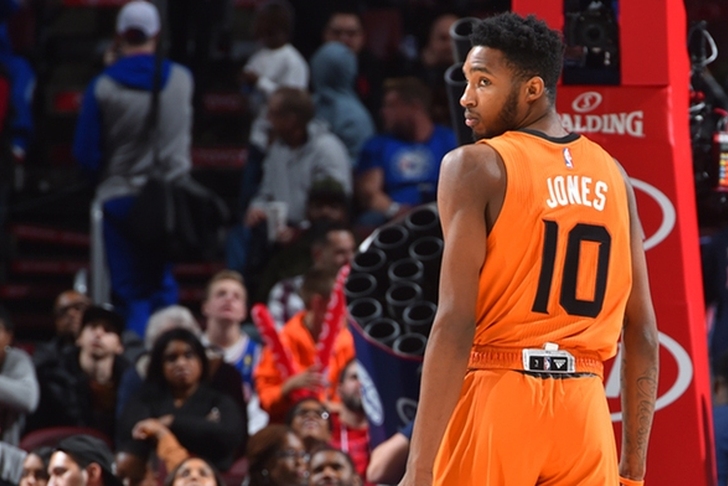 The 2017 NBA Slam Dunk Contest features last year's runner-up (who should have won) Aaron Gordon, well-known big DeAndre Jordan and even Glenn Robinson III (you know his dad). But there's also Derrick Jones Jr., a name most fans won't recognize. That could very well change after the Dunk Contest, so here's what you need to know about the high-flying Jones Jr.

High School Days
Jones was a coveted recruit coming out of Archbishop John Carroll High School in Pennsylvania in the Class of 2015. He first dunked his freshman year of high school, but had the overall game to be a 4-star recruit according to ESPN, Scout, Rivals and 247Sports. He posted an impressive 19.2 points, 10.1 rebounds and 2.3 blocks per game his final year. He's the school's all-time leader in points.

Go West Young Man
The 6-foot-7 forward picked UNLV as his college destination, spurning the likes of UConn, Auburn and several others. Prior to the season, the NCAA requested that the ACT investigate test scores recorded by Jones and several other minority athletes from a test site in Baltimore. The NCAA cleared Jones before the start of the season, and he posted 11.5 points per game and 4.5 rebounds. But with three games left, the ACT testing body cancelled the score. That made Jones ineligible and he was forced to sit out the rest of the season.

NBA Time
After the ACT issues (Jones did have a 3.25 GPA at UNLV), he elected to declare for the NBA Draft last year. He went undrafted and although he was signed by the Sacramento Kings for the Summer League, a groin injury kept him out. He joined the Phoenix Suns in training camp, earning a roster spot because of his strong play. He's played sparingly for the Suns, appearing in just seven games with 11 total points and three rebounds. He's done much more in games for the Suns' D-League squad, putting up 14.5 points, 5.6 rebounds and 1.2 blocks per game in 18 appearances.

YouTube Star
If you have heard of Jones Jr. before, it's probably from seeing some of his dunks on YouTube. And they're pretty nuts, as you can see below.

Jones has shown the ability (just not at an event like the Slam Dunk Contest) and has said he hasn't lost a dunk contest he's been in yet. That's why he's second in the odds to win the contest, behind only Aaron Gordon.