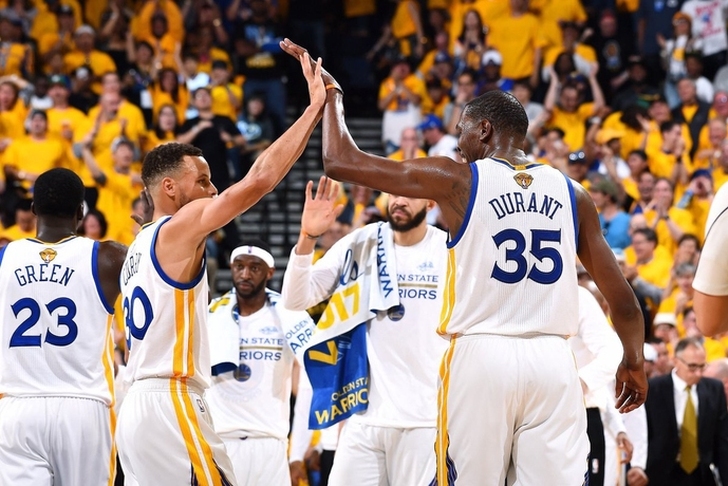 The first half of Game 1 of the 2017 NBA Finals was competitive, but the second half was not. The Golden State Warriors picked up a 113-91 win thanks to Kevin Durant, Stephen Curry and a big second half. With at least three games left, it's time for the Cleveland Cavaliers to rally and put forth a better effort to prevent the Warriors from doing what they've done all playoffs: sweep their opponent.

Here are three things we learned from the Warriors' Game 1 win over the Cavs.

Turnovers Will Kill You
This is easily one of the biggest takeaways. If the Cavs are looking for a reason why they lost, they can look at the turnovers and attribute almost everything that went wrong to that. The Cavs coughed it up 20 times, while the Warriors committed just four turnovers. That's absurd on both sides.

You can't beat Golden State with that turnover differential. The Cavs let the Warriors take 20 more shots than them. With the sheer talent on Golden State, that's a recipe for getting blown out. The 13-0 run the Warriors went on to open the second half didn't help either. If the Cavs are going to make this series, it starts with protecting the ball.

The Cavs Need Kyle Korver (And The Rest) To Hit Their Shots
For whatever reason, Kyle Korver has just struggled this playoffs. He's had plenty of open looks, but has struggled to hit them. That was the case in Game 1, when he was just 0 of 3 from the field (all from deep). But he wasn't the only Cavalier to struggle. Kevin Love was STATS from 3-point range, but just STATS from the field. The rest of the Cavs' nine-man rotation didn't make much of an impact on offense, as Tristan Thompson, J.R. Smith, Deron Williams, Iman Shumpert and Korver went a combined 3 for 20. That's not going to get it done against the Warriors. The Cavs' Big 3 is amazing, but they'll need help from the bench against Golden State.

Kevin Durant vs. LeBron James Is Awesome
The league's two best player (sorry, Stephen Curry, you were also great tonight) went at it in Game 1 and it was awesome. There were highlights galore and both players showed why they are pretty much unguardable on the offensive end. James posted 28 points, 15 rebounds and eight assists and despite eight turnovers, he had a strong game. Durant, benefitting from Curry drawing so much attention beyond the arc had several easy baskets. He finished with 38 points, eight boards and eight assists. He was the best player on the court in Game 1.

Hopefully we can get six more games of these two players (and teams) exchanging blows and moments.

Hopefully We'll Actually Have A Close Series
Before the Warriors went on a big third quarter run, this looked like it was destined for a close finish. And hey, the first half was still awesome. But the Cavs didn't play well for a good chunk of the game, as pointed out above. So if Korver or another role player can get going, if the Warriors come back down to earth, if the Cavs cut down on the mistakes, then perhaps we'll actually have a close series. That's what the NBA wants (and maybe needs) and it's what the bulk of the NBA fans want.

Check out our NBA page for more NBA Finals coverage or download the Chat Sports App!