What We Learned From Game 5 Of The NBA Finals 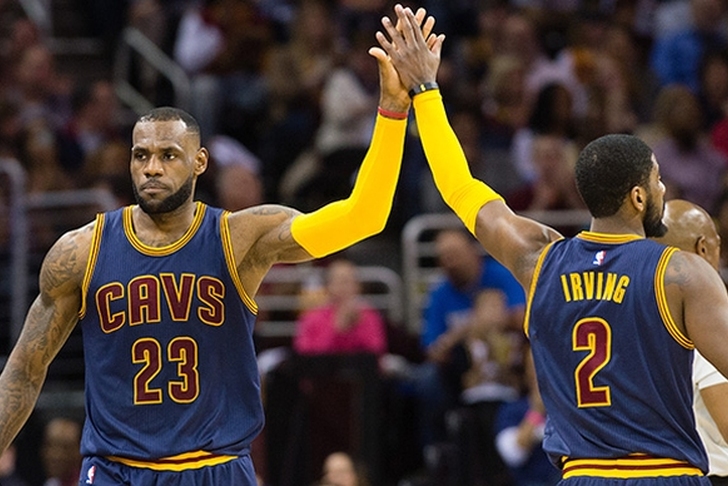 We're getting a Game 6. The Cleveland Cavaliers stayed alive thanks to an impressive 112-97 win over the Golden State Warriors in Game 5. The Cavs still face elimination, but the series is returning to Cleveland for Game 6 thanks to the efforts of LeBron James and Kyrie Irving. Here are four things we learned from Game 5 of the NBA Finals:

LeBron And Kyrie Were Bad Men
There's putting the team on your backs, and then there's what James and Kyrie did last night.

That photo sums up how great both players were last night. James' jumper was working, Irving was efficient and the Warriors had no answer for either player. The lack of Draymond Green played a role in that, but James and Irving put together what has to be the greatest two-player effort in NBA Finals history.

Harrison Barnes Was Just Bad
With Draymond Green out, Barnes had a chance to fill the No. 3 role for Golden State. He failed. Barnes took 14 shots, but made just two of them. He finished with only five points, and didn't provide the impact the Warriors needed from him. And outside of Andre Iguodala and his 15 points, the rest of the bench didn't help much either. Shaun Livingston had seven points, while no one else had more than three. Stephen Curry had 25 and Klay Thompson had 37 in solid nights that were overshadowed by Irving and James, but they didn't get the help they needed. Much of that falls on the shoulders of Barnes.

Warriors Really Missed Green, Bogut's Status Unclear
The Warriors clearly missed Green tonight. They couldn't go with their small-ball lineup without Green, because James Michael McAdoo struggled badly at center. Mo Speights wasn't much better and the defense struggled mightily when a big wasn't on the court. Andrew Bogut provided some rim protection, but he injured his knee and didn't return. He might not play again this series. Festus Ezeli and the king of flops, Anderson Varejo, helped, but they don't bring the offense Green does. The Warriors need Green for Game 6, because the entire team dynamic changed without him.

Where's Kevin Love (And The Rest Of The Help)?
The Cavs won, and they'll take it. But it took historic nights from James and Irving to give the Cavs a 15-point win. JR Smith helped early and finished with 10 points, but was in foul trouble in the second half and was limited. Richard Jefferson had eight points, which is as much as the Cavs can hope for. Iman Shumpert had four, but he's a defensive stopper not a scorer. Tristan Thompson had six points, but struggled badly when the Warriors started fouling him. The Cavs had to be carried by Irving and James because Kevin Love was MIA the entire game. He had 33 minutes of action, fourth most, but had just two points on 1 of 5 shooting. If the Cavs want to win this series, they're going to need Love to actually show up.