What We Learned From Game 3 Of The NBA Finals 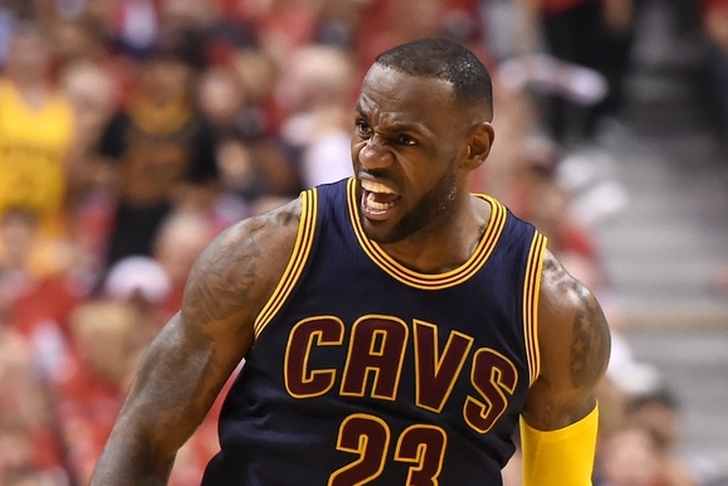 For the third straight game, the NBA Finals featured a blowout. But this time, it was the Cleveland Cavaliers that came out on top. The Cavs still trail the Golden State Warriors 2-1 in the series, but a 120-90 win Wednesday has put them right back into the series. With that in mind, here are four notable takeaways from Game 2 of the NBA Finals.

A Much Better LeBron & Kyrie
James wasn't bad in the first two games, but he wasn't good enough for the Cavs. Irving struggled in both games, and the Cavaliers never had a chance because of it. That wasn't the case in Game 3. James dropped 32 points on 14 of 26 shooting, adding 11 rebounds and six assists. He took a higher volume of shots, something he didn't do early in the series, and acted like he was the best player in the NBA. Irving finally helped in both scoring and distributing. He had 30 points, eight assists and was downright dominant early. The Cavs need at least three more efforts like that from Irving and James to win the title.

Role Players Stepped Up For The Cavs
The Cavs, outside of 12 points from Richard Jefferson in Game 2 and 10 points from Tristan Thompson in Game 1, received nothing from their role players. Thompson had 14 points and 13 rebounds, looking the dominant force on the glass Cleveland is paying him to be. Richard Jefferson got the start in the absence of Kevin Love (more on him below) and put up nine point ands eight boards. J.R. Smith finally showed up and was brilliant. He was 5 of 10 from beyond the arc, finishing with 20 points, four boards and three steals. Even Iman Shumpert helped out with some sharp defense on Stephen Curry.

Uh ... Warriors?
That might be the worst game the Warriors have played all season. The Splash Brothers struggled, going a combined 10 of 26 from the field and 4 of 18 from 3-point range for 29 points. Curry was a non-factor early, although he did finish with 19 points. Thompson had just 10 points and was a terrible 4 of 13 from the field and 1 of 7 from beyond the arc. Draymond Green looked like the Green that showed up against the Thunder, posting just six points. Andrew Bogut looked awful and only played 12 minutes. Only Harrison Barnes played well for the Warriors in terms of offense. This might just be a fluke, but there's reason for concern now with the Warriors. The Warriors went heavy with their small ball last year in the Finals and might need to do that again.

What To Do With Kevin Love?
The Cavs didn't have Kevin Love, and you can bet the topic on the talk shows tomorrow and Friday will be if the Cavs should even play Love once he returns from his concussion. While the Cavs did look amazing without Love, that's more correlation than causation. There's no doubt that the Cavs are a better team with Love healthy, and no, they should not bench him for the rest of the series. But there's a bit of a middle ground involved. Clearly, what Cleveland did in Game 3 worked and worked really well. You don't fix what isn't broken. So here's what the Cavs should do - stick with the same starting lineup of James, Jefferson, Thompson, Irving and Smith. That matchup worked perfectly for the Cavaliers in Game 3. But cut back on some of minutes, especially for the 35-year-old Jefferson, who played a whopping 33. Use Love off the bench as the best sixth man in the NBA. That will also help him be more of the go-to scorer like he was when he looked like a Top 5 NBA player with the Timberwolves. Completely benching Love is ludicrous, but making him the sixth man could be the extra boost Love and the Cavaliers need to win a title.