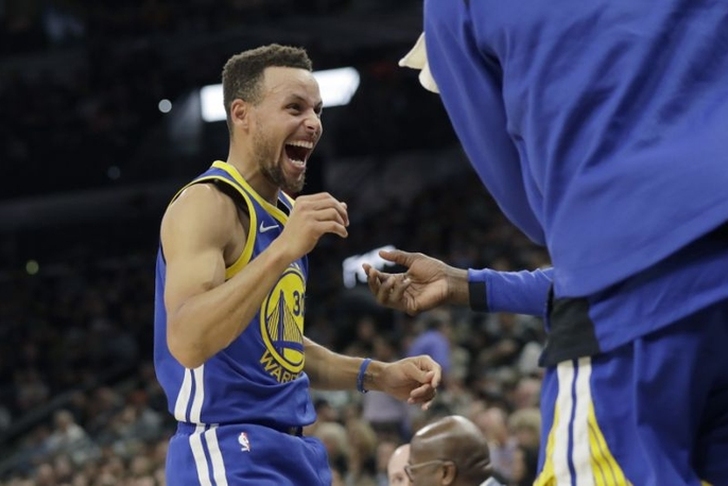 We're about 10 games into the new NBA season, so while it's still very, very early on in the season, we have enough of a sample size to see who these teams look like they're going to be this year. These early-season trends don't always continue for an entire year, but now is the time for some teams to start pushing the panic button.

The Golden State Warriors figured things out rather quickly, shaking off a slow start to win six of their last seven games, allowing them to re-take the top spot in our rankings. How does the rest of the league shake out? Here are our latest NBA Power Rankings.

30) Dallas Mavericks (1-10)
Who would've thought the Mavs would have the worst record in the league through the first few weeks of the season? It's their worst start since they went 1-23 in 1993-94, and it doesn't appear to be getting better anytime soon. It's clear Dallas needs to embrace a full-on rebuild and focus on rookie Dennis Smith Jr. as the future.

29) Sacramento Kings (1-8)
Sacramento has the worst scoring differential in the NBA, which is more than enough to put them in the last spot, but that win did come over Dallas...so they're here. De'Aaron Fox has looked fine, but this team will be one of the worst offensive teams in the league all season long.

28) Chicago Bulls (2-6)
Lauri Markkanen has played very well this season, ranking second among rookies in both points and rebounds per game. However, neither win has come against anymore more than a middling opponent.

27) Atlanta Hawks (2-8)
The Hawks beat the Cavs! The bad news about that is, well, everyone seems to be beating the Cavs nowadays. Outside of Dennis Schroder - and flashes from John Collins - the Hawks have nothing.

26) Brooklyn Nets (3-6)
The Nets already have 15 percent of the wins they had last season. Brooklyn doesn't have the roster to really compete for the playoffs and are on a four-game losing streak, but the fact that they have already won three games (including one over the Cavs) after last year's disaster (especially after losing Jeremy Lin for the year in the opener) gives fans reason to feel good. D'Angelo Russell and Allen Crabbe look promising in the backcourt and the offense is clicking on all cylinders, ranking second the league in points per game (114.3). At worst, it looks like this team may actually be fun to watch.

25) Phoenix Suns (4-6)
The Suns have a winning record since firing head coach Earl Watson. Will this continue? No. But at least the Suns have life.

24) Indiana Pacers (5-5)
Victor Oladipo has carried the offense so far, but we've seen enough from him in the past that I pause to believe he's a legit No. 1 option now. Domantas Sabonis and Myles Turner have also played well, giving this franchise hope for the future.

23) Miami Heat (4-5)
Miami struggled without Hassan Whiteside, losing three games in a row. He's back, but they're in the middle of a six-game road trip and only have one win against a team with a winning record this season.

22) Denver Nuggets (5-5)
The Nuggets were supposed to be better following the addition of Paul Millsap. Instead, they've struggled to mesh and, like Miami, have only beaten one team with a winning record. Losses to the Jazz, Hornets, and Knicks are indicative of where this team sits in the NBA pecking order.

21) New York Knicks (5-4)
Kristaps Porzingis is the FUTURE and has guided the Knicks to five wins in their last six games. I don't think that can continue, but Porzingis is solidifying himself as an elite player. For the first time in a while, the future is bright in the Big Apple.

20) New Orleans Pelicans (5-5)
The good news for the Pelicans is that the pairing of Anthony Davis and DeMarcus Cousins is working for both individually. The bad news is that the Pelicans still aren't winning big because of the lack of talent around them. Until they beat a team with a winning record, they're staying in the bottom half of the league.

19) Los Angeles Lakers (5-5)
The Lakers are 5-5 (despite Lonzo Ball's inconsistent play) with impressive wins over the Wizards, Pistons, and Grizzlies. If Ball figures this thing out, Los Angeles could be dangerous.

18) Milwaukee Bucks (4-5)
Giannis Antetokounmpo is the clear MVP frontrunner right now, but it's also become clear during Milwaukee's three-game losing streak that the Bucks don't have a whole lot around him. Jabari Parker's return in February will help, but this team will only go as far as the Greek Freak takes them.

17) Philadelphia 76ers (5-4)
Philadelphia has won five of their last six games thanks to clear Rookie of the Year frontrunner Ben Simmons, who already has two triple-doubles. As long as he and Joel Embiid stay healthy, this is a team that could definitely make the playoffs.

16) Charlotte Hornets (5-5)
Dwight Howard has been a difference-maker for this team in the middle and Kemba Walker is playing at a high level, making up for them playing without Nicolas Batum, who is still out for a few weeks. They look like a playoff lock in the weak East.

15) Utah Jazz (5-5)
As expected, Utah has had trouble finding their offense without Gordon Hayward in the picture. Their entire starting lineup is averaging double-digit points, but Ricky Rubio is their leading scorer...not a great option. They need to find a go-to guy.

14) Washington Wizards (5-4)
The Wizards have a starting lineup that can compete with anyone. That said, their bench is a major issue, and their inconsistency has shown that.

13) Orlando Magic (6-4)
Orlando was leading the East until their recent two-game losing streak, but the Magic have been incredibly impressive. They started the year projected to be one of the worst five teams in the league and have instead beaten teams like the Cavs, Spurs, and Grizzlies on their way to a 6-4 record. Aaron Gordon is playing well, Evan Fournier is playing the best basketball of his career, and Jonathon Simmons was perhaps the most underrated offseason signing. They may not be able to keep this up for an entire season, but they Magic have put themselves in the playoff mix.

12) Cleveland Cavaliers (4-6)
I admit that the Cavs are only this high because of pedigree. At some point, a team with this much talent will have to turn it around, right? If they do, it will start on the defensive end and by getting off to faster starts.

11) Oklahoma City Thunder (4-5)
Russell Westbrook, Paul George, and Carmelo Anthony are still trying to figure out how to play together, but when it looks right, they're scary good. OKC just needs to find more consistency.

10) Portland Trail Blazers (6-4)
Damian Lillard, C.J. McCollum, and an improved Jusuf Nurkic have Portland looking like a legit playoff team. They've shown they can compete with the West's elite, too, beating the Thunder and losing by one to the Clippers on the road.

9) Toronto Raptors (5-4)
We haven't learned much about Toronto yet this season. They haven't beaten anyone great and haven't lost to anyone terrible. The final verdict on this team won't be decided until the playoffs.

8) Los Angeles Clippers (5-4)
The Clippers have looked fine in the post-Chris Paul era. The players they got back in that trade (Patrick Beverley, Lou Williams, Sam Dekker) have all been vital to their success and Blake Griffin has flourished as the unquestioned No. 1 option. That said, losing four of their last five isn't a good look.

7) San Antonio Spurs (6-4)
San Antonio is finally starting to feel the effects of playing without Kawhi Leonard, going 2-4 after a 4-0 start. Still, the Spurs have identified new impact bench players in Bryn Forbes and Brandon Paul.

6) Detroit Pistons (7-3)
Raise your hand if you had the Pistons in second place in the East this far into the season. What's that? No one? Detroit has quietly compiled a 7-3 record thanks to stellar play from Tobias Harris, who is leading the team with 19.7 points per game. Avery Bradley has helped drastically on the defensive end and Andre Drummond is doing his thing on the glass. However, and perhaps more importantly, Reggie Jackson is actually playing efficient basketball. Will that continue?

5) Memphis Grizzlies (6-4)
Memphis has gone 6-4 in the loaded West with wins over both the Warriors, Rockets, and Clippers already. We thought this group was going to take a step back this year after letting Tony Allen, Zach Randolph, and Vince Carter leave, but right now, they're looking like a legitimate playoff team and have the best resume of anyone in the league. The key for them will be continuing to find offense. When they score over 102 points, Memphis is 4-0. In games they don't, they're 2-6.

4) Minnesota Timberwolves (7-3)
Look who's gelling together quickly! Minnesota has won five games in a row for the first time since Jan. 2009 and have already beaten the Thunder twice.

3) Boston Celtics (8-2)
We had all written the Celtics off following Gordon Hayward's injury and their 0-2 start. All Boston has done since is win eight games in a row with Kyrie Irving playing like every bit the star he came to Boston to be. Those wins have come against good teams, too, beating the Thunder and Spurs, among others. Jaylen Brown and Jayson Tatum are playing much better than expected, showing that Brad Stevens is getting the most out of his team once again. That level of team play could keep them at the top of the East all year long.

2) Houston Rockets (8-3)
Houston has been rolling despite the injury to Chris Paul with Memphis being their only loss. They're delivering on all their preseason hype.

1) Golden State Warriors (7-3)
A 1-2 start was puzzling, but this juggernaut appears to have righted the ship with wins over Dallas and Toronto. They'll be just fine.