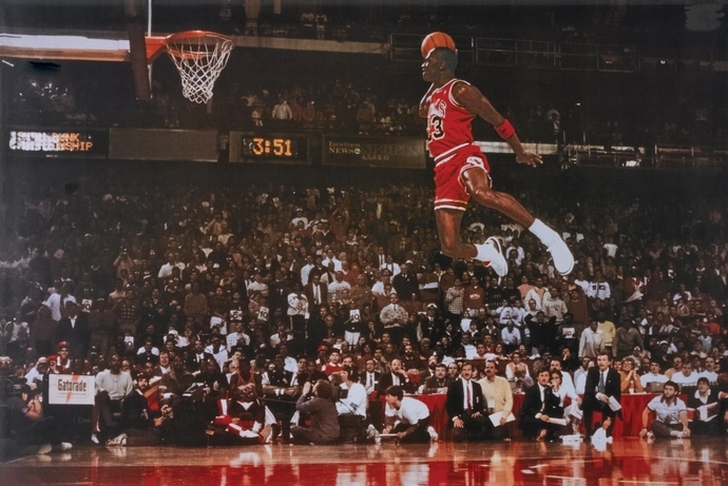 The 2016 NBA All-Star Dunk Contest will be short on star power (save Zack LaVine defending his title and burgeoning star Andre Drummond), but it's still guaranteed to be a fantastic time. However, this year's proceedings had us wondering -- just which dunk contest is the BEST of all time? We've narrowed it down to a list of six for your YouTubing pleasure.

Blake Griffin jumped over a car. Isn't that enough to warrant a spot on this list? Griffin's star was the center of the contest, and you couldn't take your eyes off the screen when he was warming up -- lest you miss something insane. It wasn't the most star-studded of showdowns, but Dwight Howard's Superman act and Gerald Green's cupcake dunk cement it at #6.

1985 provided the deepest collection of marquee names in contest history, and provided an epic Jordan/Wilkins showdown in the final. However, our favorite dunk was Terence Stansbury's picture-perfect 360 Statue of Liberty jam.

America, meet Spud Webb. The 5'6" guard landed a ton of endorsement deals after outlasting the giants in the 1986 contest -- a field which included legendary teammate Dominique Wilkins. His crazy vertical leap dropped jaws and brought people to their feet, both in the arena and in living rooms around the world. More NBA Dunk Contest coverage inside Chat Sports' iPhone and Android apps!

Dwight Howard was less grump and more bombast at this time in his career, and he dominated this four-man event -- highlighted by a nutso moment when he donned a Superman cape and slung the ball down through the net from about six feet out. The rise of Dwight as a mainstream personality reached its apex here.

Vince Carter and Tracy McGrady singlehandedly revitalized the dunk contest after a two-year layoff, putting on a show that continues to be talked about in hushed tones to this day. If you've never seen it, we're not going to spoil the era-defining fireworks set off by Carter. Just sit back and take in the WHOLE SHOW above.

Michael Jordan and Dominique Wilkins set the nation on fire in this contest, putting on a back-and-forth game of oneupsmanship that was simply mindblowing. Come for the Jordan/Wilkins showdown. Stay for the underrated performances by Jerome Kersey and Clyde Drexler.