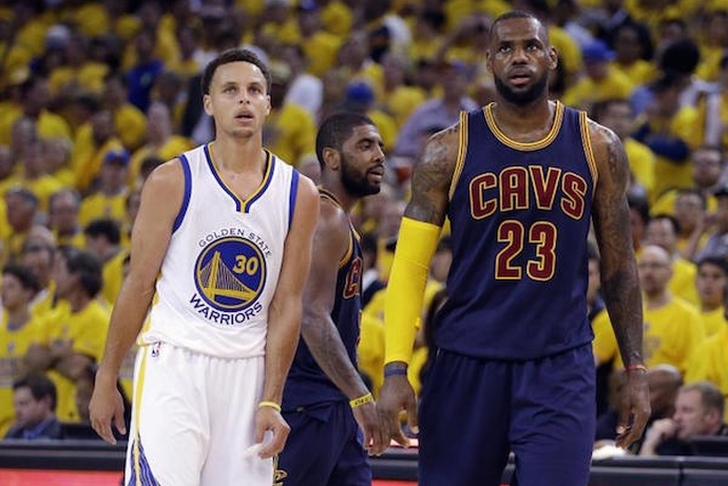 The Golden State Warriors knocked off the Cleveland Cavaliers in what was one of the most entertaining NBA Finals to date last season, and both teams are expected to return to the Finals again in 2016. However, that's certainly not a guarantee with how many other contenders are right on their heels.

So, who's more likely to win the championship this season?

For the Cavs, their path back to the Finals is much easier in the far less competitive Eastern Conference, where the Chicago Bulls appear to be the only other legitimate title contender. The trio of LeBron James, Kyrie Irving, and Kevin Love showed last year that they will simply be able to overpower everyone they'll face in the East - as long as they stay healthy, which they couldn't do last year.

Anderson Varejao, Love, and Irving - all starters - were hurt either during the season or in the Finals (or both), and Cleveland becomes a much more lethal team with a fully healthy supporting cast around LeBron James. Reports indicate that Irving may be out until January with the broken kneecap he suffered in the Finals, but he should be totally healthy by the time the postseason rolls around.

Once they get to the Finals, they're going to need much more bench scoring then they got last year. J.R. Smith was the only other player that was considered to be an offensive player for the Cavs last season outside of the Big 3. Matthew Dellavedova and Iman Shumpert are defense-first players, and Tristan Thompson and Anderson Varejao are rebounders - not scorers.

Cleveland added Mo Williams and Richard Jefferson in the offseason to help provide some scoring off the bench, but both players are in the back end of their careers at 32 and 35 years old, respectively. If they can't produce, Cleveland won't be able to beat whoever comes out of the Western Conference.

That bring us to the Warriors, who return everyone other than David Lee (who didn't make much of a contribution last year) and didn't make any significant additions through free agency.

They still plan to play the same run-and-gun, up-tempo style that was so successful for them last season with an increased focus on small ball. Golden State will have to get past a multitude of contenders in the West - most notably the Spurs, Clippers, Rockets, and Thunder - to get to the Finals, but they went 11-4 against them in the regular season and knocked off the Rockets in five games in the Western Conferece Finals.

While the Spurs and Rockets added major pieces to their teams in LaMarcus Aldridge and Ty Lawson, respectively, there's no reason to think Golden State won't be as successful against them again this time around.

The Warriors definitely have the tougher road to the Finals, but Cleveland has a less talented roster than Golden State, Houston, Los Angeles, San Antonio, and Oklahoma City, meaning they would most likely lose if they faced any one of them.

Meanwhile, if the Warriors can get back to the Finals as they're expected to, they'll be the heavy favorite to win their second consective title no matter who the opponent is, making them more likely to hoist the Larry O'Brien trophy in June.