Which player had the best sneakers of Week 17 in the NBA? 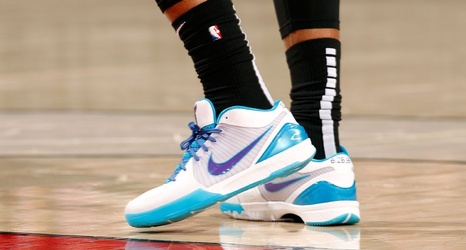 For the second season in a row, DeMar DeRozan has had the honor of debuting Kobe Bryant's latest retro rerelease of his revamped Nike signature kicks, a moment the Los Angeles native certainly doesn't take for granted.

Thanks in part to the NBA's loosened color rules, the current San Antonio Spurs scorer unveiled the Kobe 4 Protro in vivid teal and purple accents, tying back into the upcoming All-Star Weekend's host city of Charlotte, North Carolina, and Bryant's original draft day colors, after the Hornets selected him 13th overall in the 1996 draft.

"I grew up watching him and idolizing his game, then playing against him and playing in his last All-Star game with him," DeRozan said.