Thunder, Jazz reflect on shutdown, then pick up where they left off 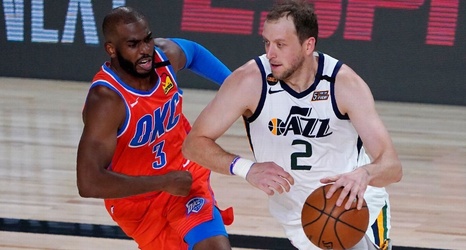 Seconds before tipoff, as both the Utah Jazz and Oklahoma City Thunder took their places at midcourt and waited for the ball to go up, there was a whistle, and a delay.

This time, though, it was just a small clock adjustment, and after it was quickly corrected, referee Scott Foster walked to the center circle and, almost five months late, officially tipped off the Thunder versus the Jazz.

"It was almost like an epiphany, right?" Thunder center Steven Adams said. "Just that weird feeling that you're in it right now.