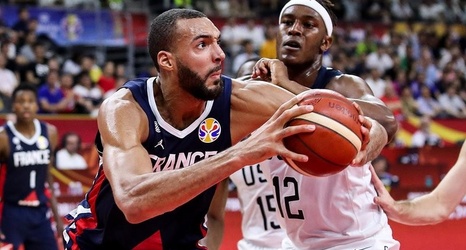 DONGGUAN, China (AP) — The U.S. has been ousted from medal contention by France at the World Cup, failing to capture gold at a major international tournament for the first time since the 2006 world championships.

Evan Fournier scored 22 points, Rudy Gobert added 21 points and 16 rebounds and France beat the U.S. 89-79 in the World Cup quarterfinals on Wednesday, rallying from a seven-point fourth-quarter deficit to pull off the upset.

The U.S. had won 58 consecutive tournament games in FIBA and Olympic competition, starting with the bronze-medal game at the 2006 world championships and continuing through every FIBA Americas, World Cup and Olympics event since.