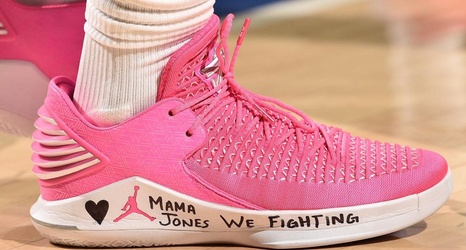 The Sixers' Jimmy Bulter sent a message to Tre and Tyus Jones's mother, Debbie, on his pink Air Jordan 32s on Thursday night as Philadelphia hosted Toronto in Game 3 at the Wells Fargo Center. He wrote the words "Mama Jones, We Fighting," on the soles with a heart. Debbie diagnosed with breast cancer earlier this year.

Butler and Tyus were teammates in Minnesota before the former was traded to Philadelphia in November.

The brothers announced Debbie's diagnosis on Instagram in early March and added that the cancer was caught "at an early stage." The Timberwolves held an online auction to raise money for breast health awareness to support Tyus and the Jones family in April.