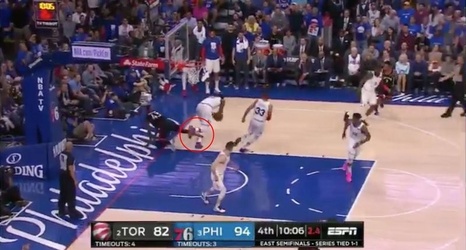 Raptors forward Pascal Siakam was called for a flagrant foul after tripping Sixers' Joel Embiid with 10:05 remaining in the fourth quarter of Thursday night's Eastern Conference semifinals clash at the Wells Fargo Center.

Siakam fell after driving to the rim and stuck his right leg out as Embiid went for the rebound.

Embiid had hit a three on the possession prior, giving Philadelphia a 12-point lead. Embiid made both of his free throws to push the lead to 14.

Siakam's flagrant came after Philadelphia's Ben Simmons elbowed Toronto's Kyle Lowry in the groin in the second quarter of Game 3.