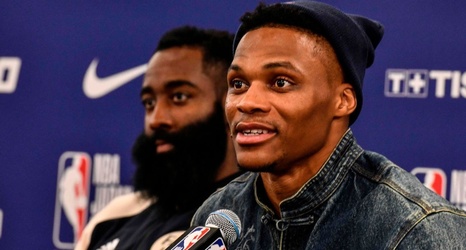 The NBA said it does not condone stopping a reporter from asking James Harden and Russell Westbrook a question about the recent China controversy.

In the news conference following the Rockets-Raptors preseason game in Tokyo, a reporter from CNN asked the pair if they would "feel differently about speaking out" on issues because of recent events.

A member of the Rockets media relations staff interrupted, saying the players were taking basketball-related questions only.

"A team representative inappropriately interjected to prevent CNN's Christina Macfarlane from receiving an answer to her question," the league said in a statement issued Thursday.