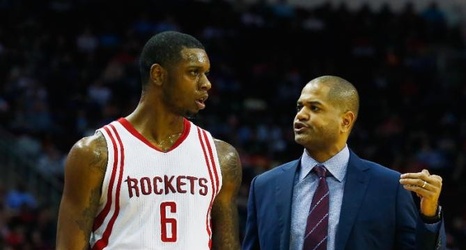 Interim head coach J.B. Bickerstaff of the Houston Rockets walks across the court with Terrence Jones #6 during their game against the Miami Heat on February 2, 2016 in Houston, Texas (AFP Photo/Scott Halleran)

Los Angeles (AFP) - Houston Rockets forward Terrence Jones was hospitalized with unspecified injuries after a car accident and will miss the team's NBA game at Phoenix, the team announced Thursday.

Jones spent Wednesday night at Memorial Hermann-Texas Medical Center after the accident, which took place as he was on the way to the airport for the team's flight to Phoenix for Thursday's game.