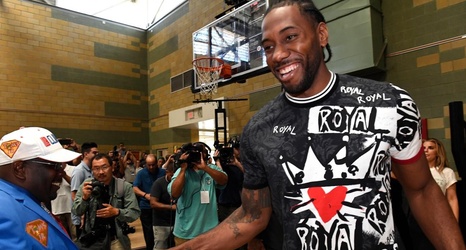 Kawhi Leonard made a major impact in Southern California on Tuesday when the two-time NBA champion, the Clippers Foundation and the non-profit Baby2Baby announced they are gifting one million backpacks to students across the area. Every student in Moreno Valley Unified, Inglewood Unified and Los Angeles Unified School Districts will receive a new backpack, per a release from the Clippers.

The announcement came two months before Leonard plays in his first game with the Clippers.

“My goal this year is to make a meaningful contribution both on and off the court," Leonard said at Cloverdale Elementary School in his hometown of Moreno Valley, Calif.