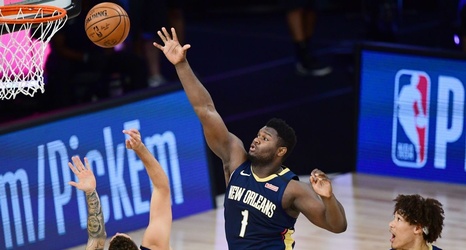 The way the New Orleans Pelicans handled the minutes of rookie forward Zion Williamson was seemingly the talk of the NBA on Thursday night as the league returned to play in Orlando, Florida.

On Friday afternoon, Pelicans executive vice president of basketball operations David Griffin spoke to reporters to try to clear up the situation -- including why Williamson played only at the beginning of quarters and wasn't on the floor as the Utah Jazz took the lead in the fourth quarter and ultimately handed New Orleans a loss.

"The reason they are taking place as they are at the beginning is just that the medical team wants to make sure he's warm and loose before he gets on the court," Griffin said.