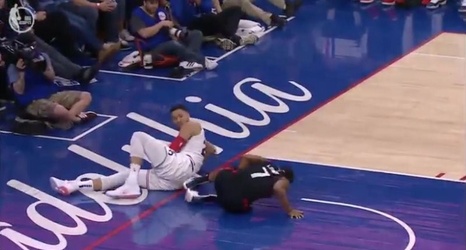 There is a decent chance Ben Simmons hears from the NBA about this play in the near future.

During the second quarter of Thursday's Game 3 between the 76ers and Raptors, Simmons found himself tangled up with fellow All-Star Kyle Lowry.

Simmons ended up on the ground after jumping for a rebound while Lowry boxed him out, and then he appeared to purposely throw his left elbow into Lowry's groin.

Simmons was not called for anything on the play, although the ESPN broadcast booth predicted he will likely be given a flagrant foul by the league retroactively.