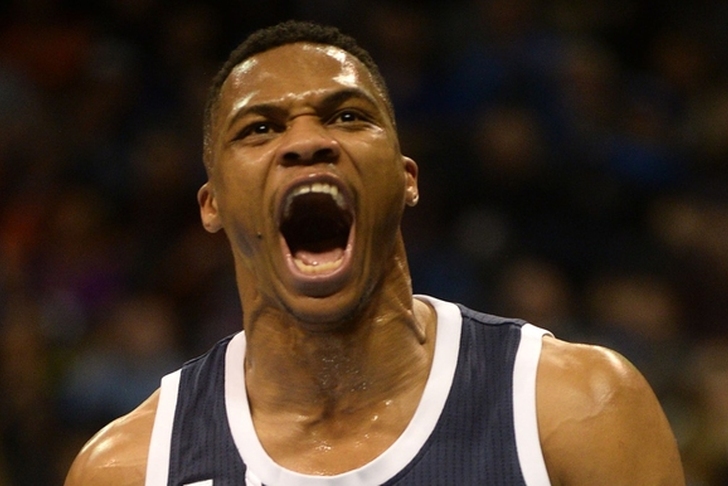 The 2016 NBA All-Star Game was one for the history books, with the West taking down the East, 196-173, in Kobe Bryant's 18th and final All-Star appearance.

The West set records for most points scored in a game and most threes (31), outdistancing an impressive East attack with an absolute shooting barrage in the second half. The teams combined for a record-shattering 369 points, rarely playing a lick of defense while letting each player get a chance to steal the show.

With that being said, here are the five players who stole the show in Toronto on Sunday night.

Westbrook is the first to win back-to-back All Star Game MVPs since Bob Pettit (1958-59), and tonight's honors will extremely well deserved. He finished 12-of-23 from the field and 7-of-17 from downtown, with eight rebounds and five assists. He was all over the court all night long, sparking the West's record-breaking attack.

The only player from the East on this list, Paul George came up just one point shy of Wilt Chamberlain's All-Star record (42) with 41 points. He may have set the record and wrested away MVP honors in a losing effort, but the West decided to double team him late to keep Chamberlain atop the all-time list.

Anthony Davis blew up Twitter all night long with an array of fantastic at-the-rim finishes, including an all-timer with the dunk above. He was also extremely efficient, going 12-of-13 from the field for 24 points while East defenders basically got out of his way in the paint.

Steph Curry DUNKED on Sunday night! Twice. Seriously though, Curry found his touch in the second half and put on a performance that would have been MVP-worthy on most All-Star nights -- scoring 26 on 10-of-18 shooting and 6-of-13 from three. His marksmanship late was a big reason why the West pulled away.

Kobe scored just 10 points on 4-of-11 shooting, but Sunday wasn't about that. The entire game was a tribute to one of the best the NBA has ever seen, from an emotional pre-game introduction to the air of respect players showed him during the game. He may not have finished with a bang on the court, but it was still a farewell we'll remember for a long time.