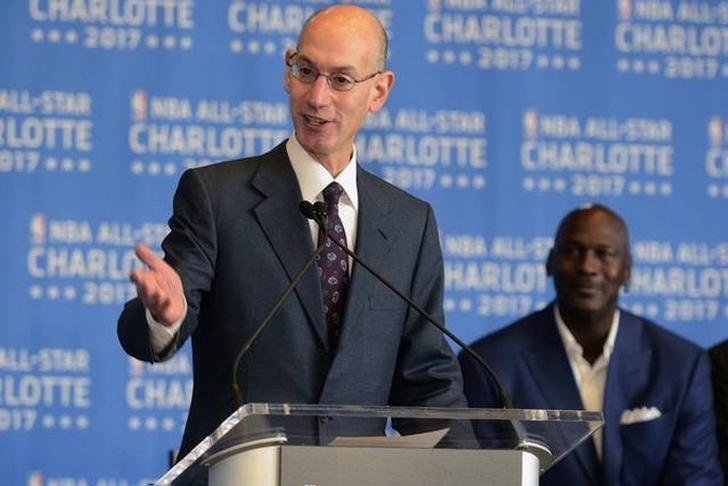 The NBA has officially pulled the 2017 All-Star game out of Charlotte, North Carolina. The league issued the following statement Thursday.

The NBA issued the following statement today regarding the 2017 NBA All-Star Game pic.twitter.com/2yo1YDA2Un

The biggest takeaway is that the NBA will try to host the 2019 All-Star in Charlotte. The NBA has not announced where the 2017 edition will take place, although the original report below says New Orleans is the early favorite.

The NBA has been talking about pulling the 2017 All-Star game out of Charlotte ever since the state of North Carolina passed the controversial HB2 law. According to The Vertical's Adrian Wojnarowski, the NBA is now preparing to do just that:

Sources: NBA on brink of pulling 2017 All-Star Game out of Charlotte, with New Orleans emerging as a front-runner to host Feb. 19 game.

NBA commissioner has described the law as "problematic," and expressed their major concerns with North Carolina lawmakers after the law passed.

"The sense was that if the NBA could give us some time, they in the community of North Carolina were optimistic they would see a change in the law. They weren't guaranteeing it and I think which was why my response was the event still is 10 months from now, we don't need to make a decision yet," Silver said in April.

"We've been, I think, crystal clear that we believe a change in the law is necessary for us to play in the kind of environment that we think is appropriate for a celebratory NBA event, but that we did have some time and that if the view of the people who were allied with us in terms of a change, if their view, the people on the ground in North Carolina, was that the situation would best be served by us not setting a deadline, we would not set a deadline at this time."

The Hornets released this statement about the league moving the All-Star Game:

“We understand the NBA’s decision and the challenges around holding the NBA All-Star Game in Charlotte this season.  There was an exhaustive effort from all parties to keep the event in Charlotte, and we are disappointed we were unable to do so.  With that said, we are pleased that the NBA opened the door for Charlotte to host All-Star Weekend again as soon as an opportunity was available in 2019. We want to thank the City of Charlotte and the business community for their backing throughout this entire process, starting with the initial bid. We are confident that they will be just as supportive and enthusiastic for the 2019 NBA All-Star Game.”

Charlotte had previously hosted the All-Star Game just once in 1991.