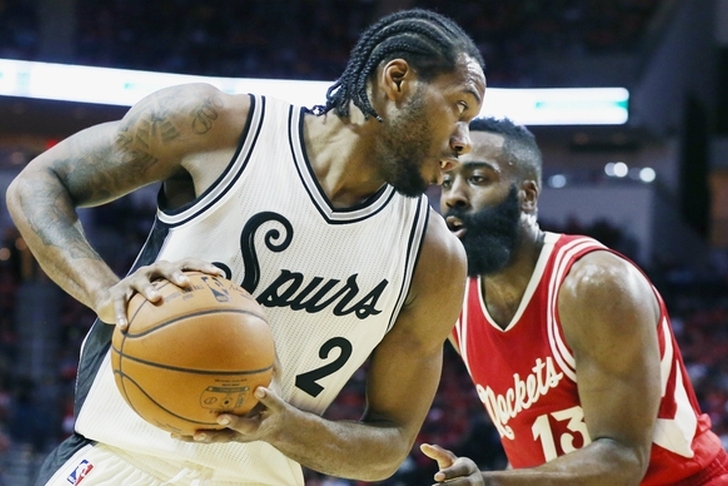 We're fresh into a new year, but the NBA contenders are already starting to separate themselves from the pack while other playoff-caliber teams are looking to find consistency. How do all of the teams project to stack up against each other early this season? Find out in our January NBA Power Rankings:

1) Golden State Warriors (31-2)
The Warriors set the record for best start to a season in NBA history, before ultimately falling in a tough back-to-back against the Bucks, but are still playing so much better that everyone else that they probably won't fall from the top spot all season.

2) San Antonio Spurs (29-6)
That being said, San Antonio has won 29 straight games at home and is just dominating everyone, winning 11 of their last 12 games.

3) Cleveland Cavaliers (22-9)
Cleveland is now fully healthy with both Kyrie Irving and Iman Shumpert back, and it shows as they've won three games in a row.

4) Oklahoma City Thunder (24-10)
OKC was 3-3 without star Kevin Durant, but have played like the team we thought they'd be in his return, winning seven of their last eight games.

5) Chicago Bulls (19-12)
Chicago's win over the Spurs showed they're a very good team, and they seem to have found their stride of late, winning four of their last five games, including victories over the Thunder, Pacers, and Raptors.

6)Atlanta Hawks (21-13)
Atlanta has traded wins and losses over the past month, but are surging now, winning seven of their last eight games.

7) Toronto Raptors (21-13)
Toronto struggled after starting the season 5-0 but have gotten back on track, winning four of their last five games.

8) Los Angeles Clippers (22-13)
LA has found their stride and is playing as well as anyone, winning six games in a row - including a perfect 5-0 road trip for the first time in franchise history.

9) Indiana Pacers (19-14)
Indiana was been absolutely on fire after an 0-3 start in winning 12 of their next 14, but have dropped two of their last three.

10) Orlando Magic (19-15)
Orlando is finally starting to deliver on their preseason promise but have hit a rough stretch, losing three of their last five games.

11) Boston Celtics (18-15)
Boston has shaken off an inconsistent start to the season and moved near of the top of the Eastern Conference standings, but have since crashed back to the middle of the pack, losing two games in a row after a four-game win streak.

13) Memphis Grizzlies (18-17)
Memphis has rebounded from their nearly catastrophic start and caught fire, but are back to trading wins and losses over the last few weeks.

14) Charlotte Hornets (17-16)
Charlotte has managed to rebound nicely from a 0-3 start and has been one of the most improved teams in the league, but injuries have really set them back over the past few weeks.

15) Dallas Mavericks (19-15)
Dallas has become a surprising team that ranks high in the West early in the season, but they've struggled to find any consistency of late, losing two games in a row.

16) Detroit Pistons (18-16)
Detroit's 5-1 start was very surprising, but they've failed to differentiate themselves from the other playoff contenders in the East.

17) Houston Rockets (16-19)
Just when the Rockets looked like they were getting back on track by beating the Spurs on Christmas Day, they've lost four straight games since then.

18) New York Knicks (15-19)
The hype has died a bit around the Knicks as they've fallen well behind the playoff contending teams in the East, losing five of their last six games.

19) Washington Wizards (15-16)
Just when Washington was headed in the right direction, they lost to the Los Angeles Lakers. However, they seem to have found their stride and are surging at the right time, winning five of their last seven games.

20) Utah Jazz (14-17)
Utah hasn't been the surprise playoff contender many expected them to be, but they are playing better of late, winning three of their last four games.

22) Milwaukee Bucks (14-21)
Milwaukee has failed to deliver on their preseason expectations and have been maddeningly inconsistent all year, beating the Warriors but losing to teams like the Lakers.

23) Minnesota Timberwolves (12-22)
Minnesota has tapered off since their promising start and seem to be freefalling, losing six of their last seven games.

24) New Orleans Pelicans (11-22)
New Orleans has been struggled all year, but they're 4-3 over their past seven games as they're finally starting ot get healthy and have been playing much better.

25) Sacramento Kings (13-20)
Sacramento is trending in the right direction and playing well - though inconsistently - going 6-5 over their last 11 games.

26) Denver Nuggets (12-21)
Denver is reeling, losing eight of their last nine games after a better-than-expected start.

27) Brooklyn Nets (10-23)
Brooklyn has shown much more fight of late against a tough schedule, going 3-3 over their last six games.

28) Phoenix Suns (12-24)
Phoenix is absolutely reeling and are playing worse than almost everyone, losing eight games in a row and 10 of their last 11.

29) Los Angeles Lakers (7-27)
Los Angeles has continued to struggle, but we have seen some positive signs lately as they've won two games in a row.

30) Philadelphia 76ers (3-33)
The Sixers have finally shown some signs of life lately, winning two of their last five games. That being said, they're still awful.