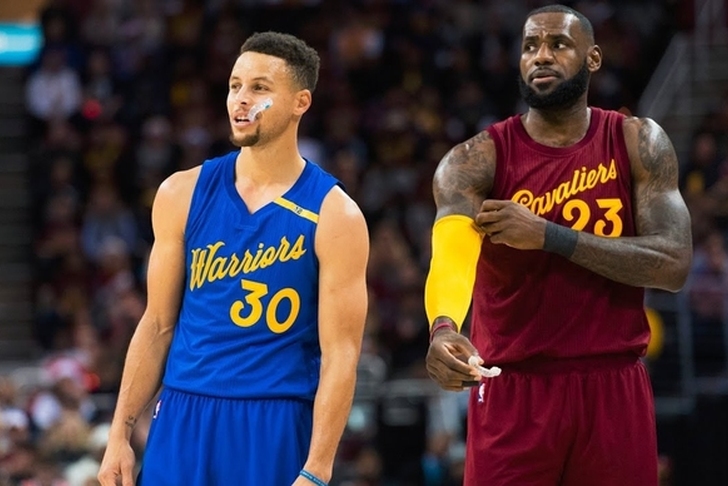 The NBA released the full 2017-18 schedule on Monday night, giving us the first look at when the marquee games of the coming season will be played. The league's schedule has been adjusted to help enhance player rest and eliminate back-to-backs by having the year start one week sooner. This year, the NBA will tip off on October 17 with two showcase games - Celtics at Cavs and Rockets at Warriors.

Those two matchups will certainly be great, but which of the other games will be the biggest of the new year? Here are the top 12 games you won't want to miss.

12) Philadelphia 76ers at Los Angeles Lakers - Nov. 15th, 10:30 pm ET
The No. 1 pick in the draft (Markelle Fultz) vs. the No. 2 pick (Lonzo Ball) in a matchup between two of the most promising young teams in the NBA. This will be a must-watch game and a continuation of a personal rivalry that started in the Pac-12.

11) Golden State Warriors at New Orleans Pelicans - Oct. 20th, 9:30 pm ET
The ultimate small ball team in Golden State going up against a team with the best big man duo in the league. Can DeMarcus Cousins and Anthony Davis give the Warriors any kind of problem?

10) Cleveland Cavaliers at Philadelphia 76ers - Nov. 27th, 7:00 pm ET
How real is the hype around the Sixers? We'll find out when the three-time reigning conference champs head to Wells Fargo Arena.

9) Houston Rockets at LA Clippers - Jan. 15th, 10:30 pm ET
Chris Paul's first game back in Los Angeles will undoubtedly bring some fireworks. Let's not forget that the Clippers will still be a playoff team in the West after the trade and addition of Danilo Gallinari. The talent of both sides and emotion that come with a game like this will make it one of the best of the year.

8) Washington Wizards at Boston Celtics - Dec. 25th - 5:30 pm ET
The Warriors and Cavs might have the biggest rivalry in the NBA right now, but the Wizards and Celtics have the most intense and most hateful. Both team wore black to signal the other's "death" at some point during the 2016-17 season, and tensions will only rise after their playoff series.

7) Minnesota Timberwolves at Houston Rockets - Jan. 18th, 9:30 pm ET
Minnesota and Houston are the two most improved teams in the West and both think they have the talent to win an NBA title. Which team will emerge as the bigger threat to Golden State? It's a crime we have to wait this long to see these two play, but it will provide us with some semblance of an answer.

6) Golden State Warriors at San Antonio Spurs - Nov. 2nd, 8:00 pm ET
San Antonio will have something to say about the "biggest threat to the Warriors" debate when all is said and done, and their first statement will come in the first of four matchups between the two sides.

5) Minnesota Timberwolves at Golden State Warriors - Nov. 8th, 10:30 pm ET
Following the Jimmy Butler trade, Minnesota is the trendy dark-horse pick to beat the Warriors in the West (if someone is going to do it). Their first matchup of the year will tell us how realistic that possibility is.

4) Houston Rockets at Oklahoma City Thunder - Dec. 25th, 8:00 pm ET
The Rockets have all the hype, but the Thunder want to make their case to be among the best teams in the West in front of a national audience. Both teams sport new All-Star additions in Chris Paul and Paul George, and both had MVP favorites in James Harden and Russell Westbrook. This will be a shootout for the ages.

3) Boston Celtics at Cleveland Cavaliers - Oct. 17, 8:00 pm ET
The top two teams in the East will square off in the first regular season game of the season. How much will the acquisition of Gordon Hayward improve the Celtics? How will Kyrie Irving's trade request impact the Cavs on the court? We'll find out in the first game of the season.

2) Houston Rockets at Golden State Warriors - Oct. 17, 10:30 pm ET
The second game of the opening night double-header features the projected top two teams in the West. Can the Rockets seriously threaten the Warriors? We'll have an idea after this one.

1) Cleveland Cavaliers at Golden State Warriors - Dec. 25, 3:30 pm ET
An NBA Finals rematch on Christmas Day? This game certainly delivered last year and in Cleveland and should do the same in Oakland.