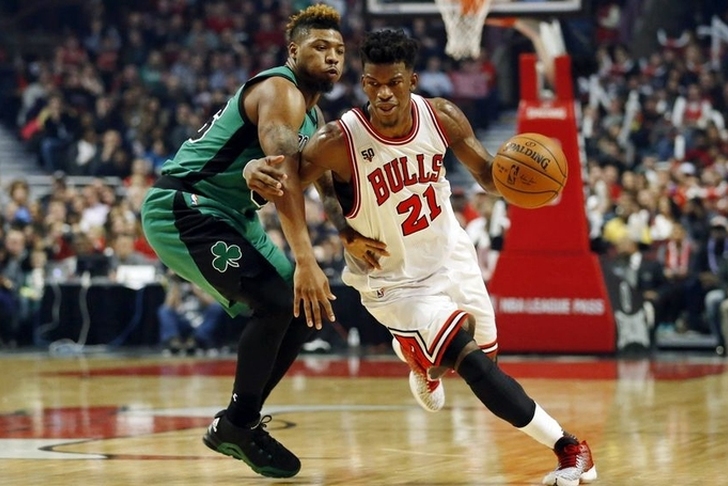 The NBA Trade Deadline is coming up on Feb. 23, and we've already seen our first big blockbuster with the Sacramento Kings trading All-Star center DeMarcus Cousins to the New Orleans Pelicans. What other potential trades may follow? Check out the latest NBA trade news & rumors below.

Celtics pursuing Jimmy Butler again
The Boston Celtics and Chicago Bulls were engaged in trade talks about a deal that would send All-Star Jimmy Butler to the Celtics this offseason, but the two sides weren't able to agree on terms. Now, the two are having trade discussions again about the same deal, according to Adrian Wojnarowski of The Vertical:

Knicks unlikely to trade Carmelo Anthony before trade deadline
The other All-Star caliber player who's name is on the trade block is Carmelo Anthony, but Wojnarowski and Chris Mannix report that he is expected to stay with the New York Knicks through the rest of the season.

"The Knicks have not brought anything to his [Anthony's] group that would inspire them to really want to waive this no-trade clause," Wojnarowski said. "Most of the teams who had interest in him are looking in other directions right now and expect Melo to remain in New York, at least for the rest of this season."

Anthony is averaging 23.4 points and 6.1 rebounds per game this season.

Wizards looking to bolster their bench
The Washington Wizards recent surge has them sitting in the No. 3 spot in the Eastern Conference. Their starting lineup accounts for a higher percentage of their points than anyone else in the league, indicating how bad Washington's bench is. As such, they are trying to trade for a high quality bench player, according to Wojnarowski:

“[The Wizards] feel like if there’s a wing player that they can get out on the trade market -- Lou Williams with the Lakers, they have interest in, Bojan Bogdanovic with the Nets,” Wojnarowski said. “Washington has shown an inclination to give up a future draft pick, a first-round pick, potentially even in this draft, to get a veteran who may even turn out to be a rental for them.”

Follow our NBA news page for all the latest NBA trade rumors!