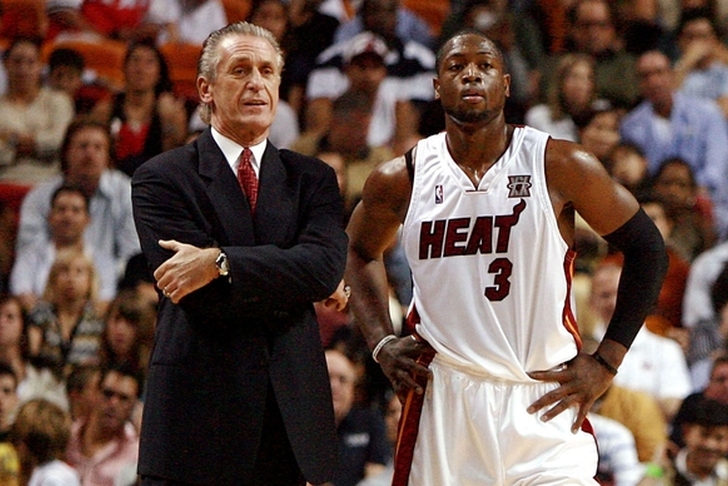 NBA free agency is already over a week old, and most of the big names agreed to deals with teams. However, there are still several quality players available and a few trade rumblings across the league. Here are the latest NBA rumors and news you need to know:

Dwyane Wade holds no ill will towards Heat, Pat Riley
Almost everyone was shocked when Wade spurned the Heat, the only he had every played for in his 13-year career, to sign with the Chicago Bulls. Even though Miami wasn't offering the kind of money he wanted, many assumed both sides they would find a way to get a deal done.

That wasn't the case, but Wade insists he doesn't hold anything against the Heat, or president Pat Riley, according to the South Florida Sun-Sentinel:

On Saturday, he used the story to describe his relationship with Miami Heat team president Pat Riley. Wade earlier this week decided to leave the Heat after 13 seasons for the Chicago Bulls but said there is no animosity toward Riley after their breakup. “There’s going to be a lot of stuff that’s said about me and Pat,” said Wade, speaking Saturday at his Youth Skills Camp at Jose Marti Gym in Miami. “First and foremost, I love Pat Riley. He’s been someone who has been a figurehead in my life since I got drafted here at 21. But at the same time, he has a job to do. He has a different hat to wear. That hat sometimes is not to be my best friend. That hat is to be the president of the organization, and to be a businessman. And it sucks.”

There were reports Wade and Riley were at odds during negotiations. Wade turned down the Heat’s two-year, $40-million contract, joining the Bulls for a deal worth roughly $7.5 million more. “Because you love somebody so well, you guys love each other, but the business side comes out,” Wade said. “You know? And we have to deal with that. I’m not saying we’ve hugged and cried and shared tears at this moment. But I love Pat and I will always love Pat. And I know he feels the same way about me.”

Wade was demanding a three-year deal in free agency, and the Heat would not offer him the extra year. Chicago did quickly, and signed him.

Paul Pierce to return for another season?
Pierce played a very reduced role with the Clippers last season as age finally caught up with him, causing him to contemplate retirement. However, Ben Bolch of the Los Angeles Times reports that the 38-year-old will return for a 19th NBA season:

Nothing official, but person close to Paul Pierce says he intends to play next season.

Timberwolves looking to trade?
Minnesota has been active on the trade market this offseason, even though they haven't had any luck on getting a deal done. They tried to acquire Jimmy Butler from the Bulls and are looking to offload Ricky Rubio after drafting Kris Dunn.

Now, Jerry Zgoda of the Star Tribune reports they're looking to add other players, too:

Wolves still looking to add another big man & another guard too. Might be waiting until RFA offer sheets signed elsewhere are sorted out

Harden signs extension with Rockets
James Harden has agreed to a contract extension that will keep him with the Houston Rockets through 2020, according to The Vertical's Adrian Wojnarowski:

Sources on @TheVertical: All-Star James Harden has agreed to a 4-year, $118M contract renegotiation that takes him through 2020 in Houston.

Harden, the face of the Rockets franchise, was entering the last guaranteed year of his five-year, $80 million deal he signed with the Rockets in 2012. Houston held a team option for the 2017-18 season.

He was due to make over $16.7 million next season - now he will make an average of $29.5 million over the next four years. The final year of the extension is a player option.