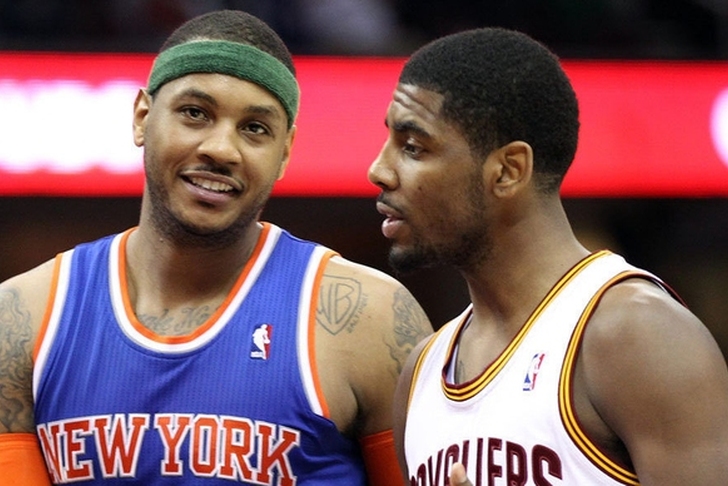 The NBA offseason is in a relatively quiet stage with free agency now pretty much over, but Kyrie Irving's trade request has taken over headlines as the latest chapter in the Cleveland Cavaliers' tumultuous offseason. Plus, the New York Knicks continue to shop Carmelo Anthony. Here are all the latest NBA rumors you need to know:

Two teams emerge as frontrunners for Kyrie Irving trade
The Cavs have been fielding offers this week for Kyrie Irving following his surprising trade demand, and there has been plenty of speculation about which teams are the favorites to land him. As of now, the Phoenix Suns and Denver Nuggets have been the most aggressive in negotiations, according to Steve Kyler of Basketball Insiders.

There has been considerable talk that the Phoenix Suns have been aggressive in their pursuit of an Irving deal as have the Denver Nuggets. Both teams offer an interesting set of options for the Cavs including veterans that could plug immediate needs and a cupboard full of rookie scale players that meet the upside need of the Cavs.

A Suns deal would likely be built around guard Eric Bledsoe, who is part of James’ agency Klutch Sports. The Suns have a roster filled with promising young players, and they have a stable of future draft picks and plenty of room under the salary cap to absorb contract money.

A Nuggets deal would likely be built around swingman Wilson Chandler and possibly Will Barton. Like the Suns, the Nuggets have a roster filled with assets like Kenneth Faired and Emmanuel Mudiay, whom the Nuggets have explored trading in the past. The Nuggets do not have space under the cap that the Suns have, but they do have proven veterans to pack into a deal that could meet the Cavs desire to stay among the elite in the East after an Irving deal.

Cleveland is asking for a proven veteran and a promising young player for Irving, and they won't trade him unless those demands are met. Irving does not have a no-trade clause in his contract.

One team that has logged real interest is the New York Knicks, their offer is believed to be built around sending out Carmelo Anthony, but as the Irving story enters its third day, there does not seem to be much interest in Anthony from the Cleveland side. The Knicks have been hoping to return something meaningful in an Anthony deal, but continue to hear that Houston is the only situation Anthony would waive his no-trade clause for.

Anthony - who does not want to play for the Knicks next season - has previously said that he would waive his no-trade clause for either the Cavs or Rockets, but is now set on joining Houston. He was reportedly convinced that he would be traded to the Rockets earlier this offseason and won't settle for anything else.

Lakers may trade Julius Randle
The Los Angeles Lakers are trying to maximize their cap space to make a run at two superstars next offseason and are willing to trade some of their young players to make that happen.

Julius Randle is set to be a restricted free agent this summer, and with him expected to receive large offer sheets from other teams on the open market, the Lakers likely won't be able to re-sign him while adhering to that plan.

As such, they may trade him before next season's trade deadline, according to SBNation's Drew Garrison.

The Lakers’ toughest decision going into the trade deadline may circle around Julius Randle, though. I’ve gone into the why already, but he’s going to be an expensive young piece to retain as a restricted free agent next summer.

Clearly the Lakers want to use their cap space to land superstars, but Randle’s going to get a massive offer sheet unless the Lakers work out a deal outright. If the team decides it’s willing to spend on Randle, the next logical step would have to be considering Larry Nance, Jr.’s future with the team.

Los Angeles' plan is to sign both Paul George and LeBron James in 2018, something team president Magic Johnson and general manager Rob Pelinka have been shooting for ever since they took over.

RELATED: Dwyane Wade wants to join the Lakers, per source