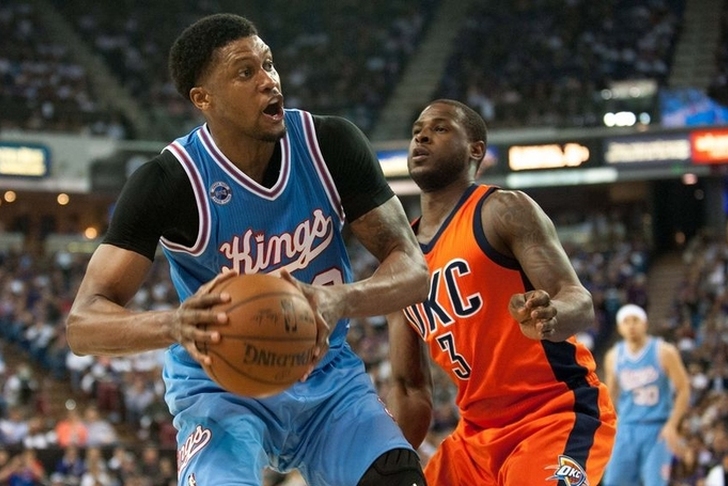 The NBA season is now a couple of weeks old, but there are a plethora of rumors already swirling around the league. Even though the trade deadline is still over three months away, several players already find themselves on the trade block - or at least rumored to be. Here are the latest NBA rumors you need to know:

Thunder still interested in trading for Gay
Sacramento Kings forward Rudy Gay asked for a trade from the team during the offseason, and they had the framework of a deal in place that would have sent Gay to the Oklahoma City Thunder. However, the deal fell apart when OKC point guard Cameron Payne suffered a broken foot - but that doesn't mean a deal is dead. The Thunder are still interested in acquiring him, according to ESPN's Zach Lowe"

They remain interested in bigger wings, including Rudy Gay, sources say, in part because such a player would slide everyone down to their intended spots: Oladipo to the bench, and Andre Roberson back to defending shooting guards.

The Kings have said they plan to keep their current roster of players together for at least a month or two to evaluate them before making any moves, but Oklahoma City seems willing to wait.

Gay is averaging 20.3 points and 6.4 rebounds per game this season.

Jazz want to sign Hill to extension
The Utah Jazz made the somewhat surprising trade of acquiring point guard George Hill this offseason, but according to ESPN's Mark Stein, the Jazz have already become such big fans of Hill that they plan to use their remaining cap space to sign him to an extension:

The Utah Jazz currently possess more than $13 million in cap space, which makes them even more interesting to watch than they already are when they play.

Reason being: Utah's cap space can be used to make a robust in-season extension offer to either point guard George Hill or big man Derrick Favors.

According to the latest rumbles in circulation on the matter, Hill has emerged as Utah's priority here.

The Jazz just signed center Rudy Gobert to a four-year, $102 million extension, so their frontcourt needs obviously aren't as pressing as securing an anchor for the backcourt. Utah is also known to be fond of Hill's leadership qualities as a playoff-tested veteran on a squad not exactly teeming with postseason experience, which is among the reasons that the Jazz were drawn to Hill as a trade target in the offseason in the first place.

Harris out at least four weeks
Denver Nuggets shooting guard Gary Harris suffered a foot injury last week, and it's expected to keep him out of the lineup for at least four more weeks, reports Christopher Dempsey of the Denver Post.

Nuggets guard Gary Harris was in a walking boot Friday, in these early days of a right foot injury that he suffered last Saturday against Detroit. And he’ll be out for a while, as some details get clearer about his expected time away from the team.

Harris’ timeline is at least four weeks out, not up to four weeks, according to league sources. And he won’t need surgery, so it’s a situation where he’ll receive daily treatment in order to get well.

Harris is averaging 10.8 points and 3.2 rebounds per game this season.