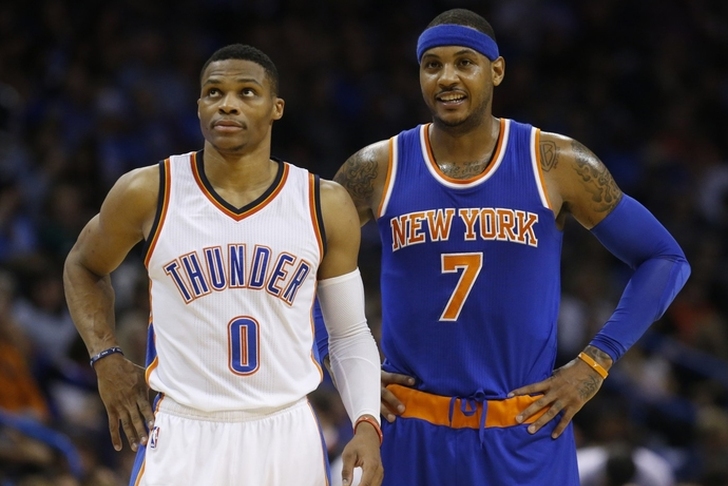 With NBA Free Agency now pretty much over, the trade market is taking center stage around the league. The potential trade of Carmelo Anthony remains a major storyline and a new team has emerged as a threat. The Cleveland Cavaliers find themselves in the offseason headlines with Kyrie Irving requesting a trade and there being plenty of questions about LeBron James' future with the team. Here are all the latest NBA rumors you need to know:

Thunder And Melo
Carmelo Anthony has been mostly connected with the Rockets and the Cavs, with the Portland Trail Blazers trying to make a pitch (more on that below). However, a new team has emerged as a suitor: the Oklahoma City Thunder.

Have a scoop - OKC and Carmelo are officially circling each other. OKC's Troy Weaver recruited Melo to Cuse + has known him since DMV days.

Weaver is the assistant GM of the Thunder and was an assistant coach at Syracuse. The Thunder, of course, already made one blockbuster trade this summer by dealing for Paul George. As for what they could sacrifice in a trade, Simmons doesn't mention much. But, they'd like have to part with Enes Kanter (or Steven Adams), while including a young player(s) like Alex Abrines, Terrance Ferguson and / or draft picks. Any trade for Anthony would result in his agreeing to waive his no-trade clause.

Melo And Blazers
Damian Lillard and C.J. McCollum reached out to Carmelo Anthony in an attempt to lure the forward to Portland. However, it doesn't appear that Anthony is interested, based on the comments Damian Lillard made on Sirius XM Radio.

Would Carmelo waive his no trade clause & go to Portland?@trailblazers @Dame_Lillard talks about what Melo said pic.twitter.com/W1bS5WLs2T

The gist of Lillard's comments are that Anthony won't waived his no-trade clause right now. So, don't expect Anthony to end up in Portland.

Derrick Rose And The Cavs
Rose is the most notable free agent left on the market and he's taking a visit today with the Cleveland Cavaliers. ESPN's Adrian Wojnarowski reports that the Cavs and Rose are engaged on a one-year, $2.1 million deal. The interest in Rose comes as Kyrie Irving wants a trade out of Cleveland. Wojnarowski reports Rose is leaning toward the Cavaliers at the moment.